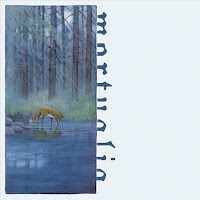 Three years ago, Shatraug of Horna and Sargeist fame produced the latest effort in an endless stream of side projects, a desolate and crushing s/t piece known as Mortualia, which violated my soul like a phallus of ice and blood. Cold and crushing, hopeless and heartless, five tracks in 70 minutes and all of them intent on freezing the listener into silence. He's kept the project active by contributing a to one split album each year, but the time has come to release a full-length follow-up. Though shorter than its predecessor (Shatraug has reined this album in at under an hour), it does bear the similarity of having five extended tracks, each a painful morsel of remorse and lamentation that will probably create a ringtone at some suicide hotline, somewhere in this world.

I was immediately taken with the cover art of Blood of the Hermit, and its simplistic grace which most bands would probably scoff at these days. A simple image of a fox drinking from a pond or lake set to the woodland backdrop. And yet the right half of the image is stark white...with the vertical logo separating them. The relevance of pointing this out is that it actually conveys the nature of the music itself quite well. Mortualia has not abandoned the bleak, deep winter of the s/t debut entirely, and yet one can't help but feel an infusion of Spring virtues...some implied 'thawing out' of all the cold and ice and dead strewn across the empty wastes of the man's mind. It's not only the cover...some of the guitar notes here seem like a warmth on the edge of eruption, and there's a vibrant underpinning that feels like a field about to bloom. Could it be a 'seasonal' concept album?

The band is still simply Shatraug, and the compositions are still over 10 minutes long, though they tend to top off around 12 minutes unlike the debut (which had a few in the 16-18 minute range). "Becoming Meaningless" boots off the album with a denseness of haunting, melodic chords that continue until the song shatters below the burden of the tormented rasping vocals, still much like a cat out in the rain, seeking shelter or scraps of rodent to fill its belly. The pace remains constant, though the texture of the riffing continuously makes a stride to the peripheral, and there is even a guitar solo here, though extremely simple. "Manic Euphoria" takes a leaning towards a more desperate pattern, with an evil archaic thrash riff that wrings doom upon the neck.

"The Sinister Shine" feels closer to the first track, but Shatraug dials up the vitriol of the vocals to such a level that they feel as if they might literally rend the walls of reality and usher in the abyss. Again, some nice fundamental lead melodies permeate the track to create a painful contrast to the withering, melodic atmosphere. "Blood of the Hermit" is the most summery of the compositions, with a nice emphasis on the ringing tone of the central guitar line, and brighter chords that crash beyond. An excellent idyll for a warm Spring afternoon, out far beyond the borders of civilization's imprint. "Pain at Least..." writes off the album with a steady, march-like tempo festooned in the extremely organic drum tone, like a procession of lost souls sent to wander about the daylight, suffering the pains of the sun forsaken them, before the cool wash of moonlight can finally subdue their restless spirits.

I'll admit that Blood of the Hermit was not so effective at destroying my will as its 2007 sibling, but part of this is in the choice of tones that spark both the wonder of the living as well as a rumination on the deceased. One element of note is that the slightly shorter track lengths breed a little less repetition than Mortualia had...for songs ranging above 10 minutes, these never seem to commit to a sense of endless hopelessness or ennui. So whatever the project has lost in emotional devastation it has gained in a heavily veiled waking of hope. The music is still brilliant, and the album cements Mortualia as my personal favorite of Shatraug's projects, eclipsed only by the occasional Horna masterstroke.

Highlights: come one, come all