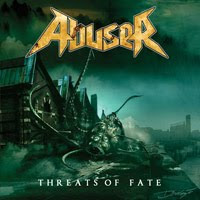 I often lament the lack of the truly good technical speed/thrash metal which once exploded forth from the European scene, in particular the sounds of bands like Paradox, Midas Touch, Pyracanda, Mekong Delta, Artillery, Vendetta, Tankard, and mid to late 80s Destruction. Well, to those of you who might feel the same, Italy's Abuser have arrived to offer you some degree of comfort. Take the sounds of the bands above, mix in a little Nasty Savage, Whiplash ferocity and perhaps an occasion or two of Realm's hyper wailing and you come up with something like Threats of Fate, which ironically feels like a breath of fresh air when so many of the younger thrash bands I encounter these days perform in a retro-tarded fashion that I'd sooner just skip, as they offer no other incentive to why you should be listening to their 'Thrash _ _ _ _" song titles and not just poring back through your back catalog of vinyl or CDs from the actual 80s.

Sure, Abuser can't claim to 100% originality, but I will take this band over 50 of the party all night with hi-tops and scene credibility denim and patches that can't write a lick or a song worth a damn. This is not the type of technical, mechanical wasteland thrash metal that some younger fans might demand due to their tech-death addled attention spans, but in 1988 or 1989, this would have been considered right at the edge of progression. The band can play, and can fly off the handle at a blink's notice, but they don't...they restrain themselves to creating excellent series of riffs that take me right back to those seminal years where thrash evolved into one of the most complex forms of music on the planet, outside jazz and classical.

This record was probably made for old farts like myself, but there is absolutely no reason it would not appeal to any who enjoy the old thrash sounds of the 80s. Each of the 10 songs displays strong compositional skill and a virtual onslaught of hyper riffing, all anchored through Walter Lamorte's multi-faceted vocal tone, which can shift from cruel to shrill instantly (and the backing vocals also help). He's also a great bassist, and well complemented by the dual assault of Marco "Toffa" Toffaletti and Stefano Bertolotti, or the spry and talented skin bashing of Lorenzo Graziani. Granted, there aren't a lot of songs here which evoke the epic, unforgettable chorus of a notable German band 20 years past, but they are all very level and tight, with a myriad of twists and turns plotted beneath the raging surface.

Thinking up highlights is difficult, because they're all quite good, but perhaps "Creations" would stand out because of its wild frenetic wall of speed as the vocals sear across the fore like a ballistic missile. "Iron Ghost" has some huge grooves and melodic chords in there that remind me of something off Realm's sophomore effort Suiciety, and it's hard not to feel the pull of something like "Missing Convictions", "Flesh Eaters" or the surging power/thras of "Possession". After 9 original tracks, the band also features a fun and hammering rendition of Whiplash's "Spit On Your Grave" from the Power and Pain debut.

There is not a lot of room for improvement, because Abuser are really damned good at what they do, especially for a band that has arrived from out of nowhere. The chorus parts could probably do a little more to catch the ear if the band wanted to really stand out alongside their forebears, but this is little cause for complaint if you have the patience to just appreciate the entire passage. The mix is good and raw, just like something out of the 80s, and that is all I ask. If you're fond of thrash that rises beyond the silly nostalgic image and actually delivers intelligence, venom and passion through both the lyrics and music, as thrash ALWAYS SHOULD HAVE BEEN, you absolutely must seek out Abuser, they are one of the best newcomer bands I've heard performing this style (alongside the USA's Vektor).

Highlights: the lack of craptacular 'thrash' stupidity. There is also music.