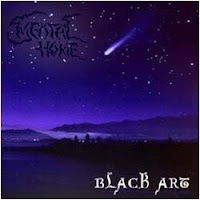 I have some rather fond personal memories of this album, for it was one of the first I received (an advance, promotional cassette copy) for the crude, black & white pen & paper zine I started in the later 90s, or at least one of the first I can remember a positive reaction toward. In time I have come to appreciate its predecessor Vale slightly more, but that's not to fault Black Art's natural progression towards a more bold, symphonic sound, and there are some highly memorable tracks on this album still to this day. This album did see one lineup change, with Michael 'Maiden' Smirnoff replacing Roman Povarov on the keys, and perhaps this is felt through a slight increase in the classical influence woven throughout. But it's not a huge transition from Vale, the material on both of these albums could flow and intertwine in any set list and the unwary listener would hardly notice a difference.

Black Art does remind me of Vale in that it seems much of the better material lies on the first half of the album. But once again, it's not that the remainder of the album is necessarily bad, just not as instantly adhesive or memorable in the long term. "Under the Wing (of Gamayun)" channels lush, atmospheric pastures of piano and night noise before a brief, spoken vocal intro and the ensuing stream of melodic guitars that climb towards a majestic summit at 1:35. There's a proggish pop synthesizer that initiates a rather weak bridge, at least until the storming surge of guitars and vocals around 4:30, and the track cycles around to a dramatic close before the vibrant mystique of "The Plague Omen" explodes, perhaps the best song on this album for its titillating arches of keys that break across the guitars like waves through several of the segments. "Into the Realms of Marena" seethes in the rush of wind, pipe organs and further night samples before a nice melodic death melody that sounds similar to something from In Flames' "Moonshield". The smooth bass, bells and melodies of "Silent Remembrance" are gorgeous, another of the album's best, but though the heavier rhythms here are quite well placed, I do wish they would have revisited the motif of that intro more in the track.

After this is the instrumental "In the Shades of Inspiration", all strung out in pianos and synthesizers to help introduce the graceful power of "Pagan Freedom"'s opening riff, but I found the rest of this track to be well-to-do, average melodic/gothic metal with the exception of a few riffs. "Winter Art" is a spidery, gothic gloom of whispers and keys that crawl towards the volcanic twist of melody around 1:20, but despite the rise and fall polish it's simply not that hooky. "On a Hand of the Universe" fares slightly better, with some cool, cruising melodic folk/death lines that recall Amorphis' "Elegy", and a sound overall structure, and "Tides of Time" is a solid closer with Sergey Dmitriev performing his most consistently black metal vocals yet.

Fans who liked Vale will most assuredly get something out of Black Art, but only a few of the songs here are worthy of standing in the shadow of a "Southern Calm Waters" or "Aevin's Cage". It seemed the band were off to a more rousing, straight symphonic black/doom metal style which might have manifested itself alongside the Dimmu Borgirs of the world, only the followup (and final Mental Home album to date) Upon the Shores of Inner Seas would spin the band off down another path. Obviously I recommend the full-length debut over this, but Black Art is the only other album the band released that would warrant a purchase. It wasn't a complete step backwards at the time, it was very exciting in a world which was producing very little symphonic black/gothic metal of any worth. But the songs are simply not all that enduring.

Highlights: Under the Wing (of Gamayun), The Plague Omen, Silent Remembrance