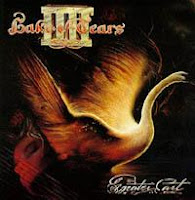 The first time a friend and I happened upon Lake of Tears at a used/import CD store in New Hampshire, we knew we were onto something special. A doom metal band with an awareness for both melody, classic rock and the atmosphere of acts like early Paradise Lost or Tiamat. The band was up to Headstones by that point, and I was more impressed by that sophomore offering, which shows broader strokes of influence and highly memorable songwriting, but there remains a simplistic charm to Greater Art that has failed to deteriorate in the many years since. That is to say: I didn't love the debut then, and I don't feel much more strongly about it today, but I still listen from time to time for a handful of the better tracks.

To best describe the style they were working with here, think of Tiamat's album Clouds sans all the symphonic elements, keyboards, and the few true death metal rhythms found there. Think of how that record might have felt stripped down, with a heavy emphasis on incredibly basic, moody doom rock rhythms that find their roots in the sounds of Blue Cheer, Black Sabbath, and Cream. Weave in a few of the sorrowful melodies of a band like Paradise Lost, Pyogenesis or My Dying Bride, and apply Daniel Brennare's brute vocals, which feel somewhat like Johan Edlund's older work, or Matthias Lodmalm of Cemetery, merged with Tom G. Warrior's attitude in Hellhammer or Celtic Frost. In fact, Lake of Tears' career has run an interesting parallel to both Tiamat and Cemetery, the bands even swapping a few members through the years, but where the latter have ventured into more of a gothic, dark territory, Lake of Tears have stuck to rustic poetry and folk inflection.

I'll admit Brennare is at his lowest point here, just beginning to develop himself as a frontman, and would truly flower on the later albums like A Crimson Cosmos where he mixed up more cleans with his heavily accented grunts. But really, with writing so fundamental as found on A Greater Art, there is little more required of him. The album is 8 tracks in 34 minutes, and this is a band which has almost always supplanted the traditional, pretentious, unnecessary length of many doom songs for a more attentive, pop structure. There's but one exception to the rule here, "Upon the Highest Mountain", a seven-minute wandering which is given a 13+ minute sequel on the followup ("The Path of the Gods").

But first on the scene is "Under the Crescent", an atmospheric, slow grooving track reminiscent of something that would appear on Clouds, left to simmer in some synthesized pipe organs and picking up into a mid-paced riff akin to some of the writing on Cemetery's Black Vanity. Mattias Lodmalm even appears to help out the band here, adding backing vocals on several tracks, while the keys are performed by the noted producer/engineer T. Skogsberg. "Eyes of the Sky" is a little more uptempo, with a wah cutting through the big chords and little chug to the bridge riff. "Upon the Highest Mountain" arrives in synthesized woodwinds and clean guitars before a slow, drudging rhythm kicks in beneath the very Edlund-like, brute yet emotional vocals. The song is plotted out well enough so it doesn't bore, spewing out resonant textures through the very light use of synthesizer and the simple but fetching melodies of the bridge. "As Daylight Yields" opens with a good old Tom G. Warrior 'ooooaaaaah', one of the hardest rocking tracks on the album, and possibly my favorite, as I'm a fan of where the keys collide with the chorus.

By this point, you do get the feeling you've heard the entire album, for the rest of the tracks are slightly less inspiring. "Greater Art" sounds like a mix of "As Daylight Yields" and "Under the Crescent", while "Evil Inside" is an extremely minimal, sludgy piece with some creepy whispered vocals creating a rhythm besides the slowly shoveling riff. "Netherworld" reminds me a lot of a Pyogenesis track from Sweet X-Rated Nothings, only with the Lake of Tears guitar crunch and an acoustic interlude with keyboards. "Tears" is gothic and gloomy, due largely to the vocals, in which Brennare talks more than grunts, and a sad, popping melody through the guitars of the 2nd verse. It's probably my favorite track out of the album's second half, with the dreary lyrics dealing in ravens and sorrows and distant paths and other tropes this band will consistently use on their albums (in particular Headstones).

A Greater Art is enjoyable enough, especially for fans of doom and stoner rock in the 90s who liked a lot of power behind the guitars. It's not completely neanderthal as far as the writing, as it seems great pains were taken in each track to offer the perfect level of atmosphere alongside the layman level guitars. It's a great stepping off point for the catchier sophomore effort, and does offer some hint as to how good this band will become once they fully burst from their chrysalis.

Highlights: Under the Crescent, Upon the Highest Mountain, As Daylight Yields