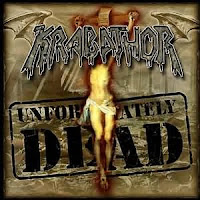 Never really able to nail a stable line-up for long periods of time, it was a new Krabathor album and yet another change in the ranks. For Unfortunately Dead, the 5th full-length album, the band's brutal shift in tone to Orthodox is once again tweaked, and this time the band produce a dense, aural assault that honestly reminds me Morbid Angel's Domination if only for the crisp but swampy tone to the guitars, or some of Immolation's albums. The songwriting is not on par with that underrated gem, though, and the few promising tracks feel squandered by weight of the rest, which tend to summon 1-2 good rhythms and then throw them away on a less than compelling composition.

Unfortunately Dead also marks the arrival of the prolific Paul Speckmann to the Krabathor roster. You probably know the guy from his other death metal bands like Master, Death Strike or Abomination, and he's a natural fit for the Czech band's primal, hammering tones. However, while the bass on this record is more than competent, I felt a void in the passing of Bruno to Hypnos. The massive, distorted bombast that supported Orthodox is missing from this album, putting even more emphasis on the guitars, with mixed results. Speckmann's vocals are a nice addition to Krystof's, though. 'Skull' remains on the drums here, but he feels somewhat less powerful in the mix, with a very tinny crash to the drums that also suffers beneath the massive ballast of the thick riffing.

"They Are Unfortunately Dead" phases into being with a wall of chords that channel 90s Morbid Angel into Hate Eternal and then dance about the ashes of the resulting nuclear fission. This is actually one of the better tracks on the album, as the opening conjures up a snakelike mystique and a pumping, holocaust thrash with an oddly chugging, melodic bridge that angles into a strange solo. "The Eagles You Can Have" metes out some faster paced chugging, again adorned in a subtle texture of melody, and an interesting mid-paced thrash blockade arrives before 1:30, soon to morph into a moody drum charge with atmospheric, ringing chords and little else. I was really hoping for some sick riff to erupt at this point, but it sort of loops around to the beginning of the track and doesn't really capitalize on its potential. "Mirror of Your Steps" exudes an apocalyptic death/thrashing that could have produced some wondrous results, but it lapses into another rolling subdual with some rather predictable, if brutal riffing. Skull and Speckmann drive forth the "Different Fate", with a fine chugging gait, and this track has some interesting segments within it that sort of mirror my feelings on "The Eagles You Can Have".

"Surviving on Arrogance" is another of the album's stronger pieces, beginning earnestly with another chugging, frenetic tempo that shifts into some very cool, lumber hacking rhythms. I like the somber chords after the minute mark, and the pick up to the swerving bass, and the slowly shifting rhythms of the extensive bridge offer a little adventure. "To Be Unknown" is likewise a curious piece, with some effects over the drums and an extremely moody spike of melodic lead work that channels more depth than almost any other musical sequence on the album. The rest of the track doesn't quite live up to it, but nonetheless it moves fluidly forward. "Living On the Threat of One Finger" is bouncy and aggressive, with some wild drumming buried within, but by this point the rolling, chugging rhythms have begun to feel a little redundant, despite some decent rhythm work after 3:00. "The Evil Men Can Do" is a brief, crawling death/thrasher which picks up some momentum as it continues to abuse its one central riff, though it has a decent lead. The epic, sprawling "Death Through the Centuries" is an 8-minute finale to the album which transitions from haunted, sweeping pianos and synthesizer, to a sequence of narrative, percussive vocals that marry the marching drums, and finally a sludgy mosh stomp segment and more creepy keys courtesy of a guest performer. Occasionally it borders on brilliant, and occasionally it hinges on boring.

Although I rarely ever feel the impulse to listen back on it, Unfortunately Dead was not a total loss. It had an interesting, churning tone to it which was an unexpected departure from Orthodox, yet this is not a band that has ever really offered the same album twice, an ever shifting engine of destruction. The lyrics seem very personal, and not always very good. It exists in a rare space between Krisiun, Morbid Angel, Hate Eternal and Immolation, so fans of any of those bands might find something to like here. I simply wish the riffing had been as memorable as the atmosphere.

Highlights: They Are Unfortunately Dead, Surviving on Arrogance