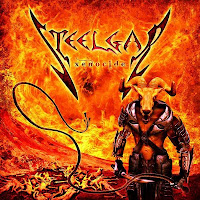 Steelgar are a Spanish band who formed some years ago in order to create a sound which pays tribute to the American thrash, speed and power metal giants of the 80s. Among these one might include names like Exodus, Megadeth, Testament, Metallica, Slayer, and so forth, but the resulting concoction reminds me more of a mix of later Agent Steel, Läaz Rockit, Metal Church, and perhaps a little Kreator due to the angst and catlike vocal bite of Hector Amaya. You won't get a lot of highly technical momentum from their writing. Instead, they focus down on one to two rhythms per track that evoke feelings of both nostalgia and aggressive, street-tested ass kickings that will make you want to bang your Joey Belladonna curls against the stage in triumph and raise your horns to the Unholy one.

The Spaniards definitely know how to make a positive first impression, and Xenocide arrives with the venomous thrust of "Injected", centered around a riff which would not out of place (and would be welcome) on one of the more recent Slayer albums, before an Overkill-fused rolling rhythm that reminded me somewhat of "Elimination", aside from Amaya's harsh generation of Mille Petrozza-like snarls. The solos are tight but predictable, and the song is followed by another, fast paced monstrosity in "Retaliator", which also flexes the band's ability to deliver with a very simple rhythm, this one fragmenting into a solid mid-paced thrashing. "Portrait in Blood" also works in this steady tempo, with some very cool vocals and a verse riff that reminds me of earlier Hexenhaus from Sweden, though not as dense or atmospheric, with a little modern Kreator for good measure.

The band does have the ability to diversify, with the more bluesy, grooved out riffs of "Under the Whip" or "Napalm Burn", but Steelgar is certainly at their best when the riffs are executed more violently, as on "Promontory", "Army of Goats" or the snarling speed and power metal of "Hunter On Prowl". Lyrically they invoke both science fiction themes of violence and conquest and the usual feel-good overtones of youthful aggression and vitality. Through it all, the musicianship is sound but never overwhelming, and the riffing quality is average to good. There are very few 'what the fuck' moments that leap out at the listener, but it'd be a good choice for a night cruising around town with your buddies, syncopated headbanging while the designated driver tries not to get you all killed.

Steelgar may not stand out completely from the vast hordes of old school thrashers around these days, but it's good to see a band very honest about trying to invoke the spirit and nostalgia for the very best of the business in the 80s, or at least the more popular acts. There's also been a lack of artists playing in the thrash metal genre forever now, even some of the 80s bands like Fuck Off left something to be desired, so I am excited to hear one that clearly knows what they are chasing after. Xenocide is a fun, if occasionally forgettable experience in spikes and steel.