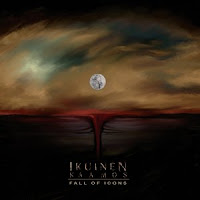 Ikuinen Kaamos coughed up only a little buzz for their debut The Forlorn in 2006, which is surprising, since this is one of those bands that take the progressive black/death metal formula of a band like Opeth and shake it up enough that musical merit is created. Some might not desire to wade their way through such long compositions as this band commits on the follow-up (like the debut), but the atmosphere created through the constantly labyrinthine riffing is a rare one that may be worth the investment of 5 tracks in 54 minutes, ranging from the slight "In Ruins" at just under 8 minutes, to the closer "Apart" which is over 16.

I do hate to drop the name again, but Ikiunen Kaamos remind me quite a lot of a Finnish Opeth. Not just for the length of songs, but the way the riffs flow together to form the songs. The alternation between clean, tranquil segments and the more jarring streams of colliding melodies and snarled vocals. I don't intend this as a negative comparison, because the band actually evokes what I liked most about the Swedes in their prime; the ability to not only allow each musical thread to run its course, but in doing so to actually write a slew of decent guitar riffs in the process. Vocalist Risto Herranen can hardly be attributed to sound like Mikael, he's got more of a rasp to his voice for most of the duration. He can also grunt when needed, and sing in cleaner tones, which unfortunately come off as a little weak by comparison to the rest. The guitars of Ruuskanen and Mikkonen are the true vehicle of this sound, constantly at work over the drums, but the bass could have been louder in the mix.

Each of the tracks across Fall of Icons presents a separate commitment to the listener, but they also merge quite nicely into a single mesh. "Indoctrination of the Lost" wastes little time in absorbing you into its weave of melodic mystique, over some of the deeper death grunts that sound more like an Akerfeldt than usual. Occasionally there will be acoustic guitars used in conjunction with the verse rhythm, lightly plucked as if for some classical strign interlude. The song does break down fully into acoustics and pianos before the midpoint, and I didn't feel like the deeper gothic vocals were all that impressive, nor the micro bluesy leads. It's the same quandary I have formed with other, similar bands, in that a song should not simply be lengthened out with clean guitar segments for the sake of it, and Ikuinen Kaamos does sadly fall into this rut from time to time. But the remainder of the music here, as it develops an intense, lamenting necrosis, is almost captivating enough to ignore the moments of unnecessary downtime.

The next three tracks are all marginally shorter, beginning with "Statues". It's got some very solid rhythm work here, especially in the first three minutes, where the vocals erupt over the rise and fall of the scale in the verse riff. This track too takes a breather and escapes into some clean, classical guitar segues which I did not feel added much. "In Ruins" also visits the band's softer side, but at least this track makes it clear immediately. Once more, I'm not a fan of the clean vocals in the bridge, and the following track "Condemned" is yet another to shift between mild patterns of ecstatic, longing electric melancholy and forgettable clean sections that I want to pluck out like a raven would an eyeball. "Apart" is the true behemoth of the album, closing in on 17 minutes before its closing harmonies ring out. As expected, it doesn't really hold its entire weight up, seeming like it is built of riffs that could have been divided into 2 or even 3 separate entities and lost nothing. Of all the tracks, this one gets the most proggy, in particular I mention the punchy riffs that come deep into the latter half of the track, with a light accompaniment of synth and the second melodic guitar. There is some good riffage here, simply not 16 minutes of it...

I have little doubt that Ikuinen Kaamos are a talented lot of guys, and those who desire a little progression in their black and death metal rather than the usual blasting and brutality might find this acceptable towards the 'thinking man's' end of the spectrum. That said, Fall of Icons does suffer from the same curse of overindulgence that has rendered similar acts (Opeth being the obvious example) less effective than they might otherwise be. There is a large enough ratio of compelling material on this sophomore effort to compensate from some of the yawning distractions, but the band might opt for a more powerful effort the next time out by trimming some of the cliche skin and fat from the animal, to instead get the fangs wet only on the blood, meat and marrow.

Highlights: Indoctrination of the Lost, Condemned