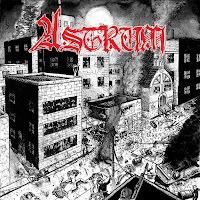 Astrum is a relatively newish band with members from Kentucky and Indiana, who have been sharpening their skills over a series of demos in the 21st century, culminating in their first full length recording, Apocalyptic Dawn. The band has a strict DIY attitude and perform a fusion of black and thrash metal with a punk edge. The most obvious comparison would be made to the legendary Hellhammer, as the vocals seem like a looser alternative to Tom G. Warrior's warbling, and there is often a similarity in the riffing. However, considering how many acts out there have made a 'career' out of simply aping the Swiss pioneers (Apocalyptic Raids and Warhammer come straight to mind), Astrum's influence seems rather tame by comparison. The vocals and lyrics see the greatest semblance, with the band even offering tribute directly through the inclusions of lines like 'another night, apocalyptic raids' from the track "Children of the Apocalypse". Basically, try to imagine if Hellhammer had not formed on some Swiss mountainside suckling chocolate and sporting shiny new ski-boots, but instead emerged from a down South whiskey cellar, reared on Discharge, Fear and the Misfits as much as Sabbath.

This, to me, is Astrum! There is absolutely nothing pretentious going on here, and the recording itself seems extremely crude and raw, as if the band simply plugged in at a jam session and perhaps had some software or a friend handy to track them. The guitars are rather rugged, the drums live and bringing back many drunken weekend rehearsal room memories, and the bass distorted and pumping just slightly below the desired level of audibility. There is nothing complex about what the band writes, they just rock out on some basic riffs and have a blast. In other words, there would not be a lot of appeal to anyone demanding hyperspeed rhythms and leads out of their metal, or even a resonable level of musical proficiency. That is not what this band represents. Astrum is a return to the roots of aggressive music, where a riff, a morbid lyric and a good time were all that one required. The lyrics are not especially bad, but they do rifle through a series of cliches that conjure up the visions of some possible future world of bedlam and mayhem, where sex, Satan, drugs, and riots rule the day. I'd consider them half silly, in part when the band becomes self-referential, and half serious, but too amusing to rule out entirely.

There are two technical issues with the album that I feel like I should point out, as they leave some room for future improvements. The sound quality of the recording not being one of them, as I can certainly appreciate this sort of go it alone approach. First, a few of the vocal lines often feel rushed or sloppy or slightly 'behind' the meter, as if they possibly should have been given another go. This is not the rule, but the exception, and for every little glitch of this nature there are 10 or 20 lines delivered on tempo with clarity, it is but a few of the tunes like "Slave to the Tyrant", and "Desecration" where it feels messiest during the verse. The other down side to the recording are the leads. Now, I'm actually a fan of the occasionally sloppy lead on a metal track, but the leads here tend to consist of one or a few notes just being wailed on. I'm of the opinion that it adds very little when this happens, and that the guitarists should just go fucking crazy, even if it sounds sloppy. Hey, it worked for Slayer for years...

With that out of the way, I have few if any complaints about what Astrum have accomplished here. The underground spirit is alive and well with the band's compositions, and in truth I prefer it when the band gets even more punk and even less proto-black, as on the tracks "Killigious", "Mighty Swords of Thunder", or "Empire", where the riffs are well worth a spiked fist salute and the band never trips upon the basic building blocks that thrive below the surface. I wasn't keen on a lot of the more metallic tracks, but of those I'd have to say "Children of the Apocalypse" takes the gold medal due to the violent imagery the vocals conjure and the churning, unconcerned grooves that crash along below. Not to mention the bass just naturally feels louder in that particular song. The band also include a cover of Discharge's "The Price of Silence" from the 1983 single of the same name. It sounds like a solid fit for the band's live sets, and I'd like to think they incorporate a whole slew of similar, if obscure old punk, thrash and crusty core into their performances.

Apocalyptic Dawn is a good watermark from which the band can hone their sound, but I found that I only had a positive reaction to several of the tracks. But I'm largely a riff guy, so even when a band's riffs are purely primitive like those that Astrum write here, I tend to have pretty high demands on their consistency and infectiousness. What I do admire is the band's no bullshit aesthetic for roughing it up and having a good time. No trends. No dishonesty. Just raw fucking punk and metal, culled from the source. I'd recommend giving the band a listen if you enjoy early Celtic Frost, Hellhammer, and the many bands that have eaten the fruit from their limbs. I'd compare Astrum to the Hungarian band Dög, though this is a little lighter and more punk-savvy.