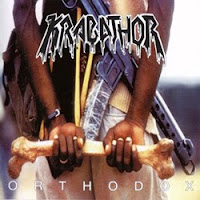 Krabathor's 4th full-length album Orthodox arrived with a rather 'unorthodox' image gracing its cover, which would perhaps lead the listener to believe that the band's focus has shifted towards the more political realm of death metal, and to an extent this is true, though the band was lyrically exploring these themes on Lies and you could find several examples on the earlier albums. What struck me as a far broader difference was the tone of the album, because Orthodox is the most crushing production of any Krabathor album to date, due largely to the huge, syrup-like distortion of the bass and the ever bludgeoning guitars, more apt to deliver a headache than anything the band had released prior.

This album is a natural extension of the Mortal Memories EP from two years prior, albeit with newer material to complement the title track, which we'd already heard but seems polished up in its place as the album opener. Scorching and virile, it blasts and burns through 3 minutes under the power of new drummer 'Skull' and his methodical footwork. Krystof's chords are far denser here than Lies, but he retains the thrashing influence he has involved since the debut. "Liquid" is our first sampling of something new, and it writhes under the weight of a battering ram, erupting into a melodic riff that seems like a beefier cousin to something that might have appeared on Slaughter of the Soul. "Shit Comes Brown" is a brief anti-Nazi, anti-war track which clocks at just over a minute, with pretty goofy lyrics and thrash/punk riffing that is ultimately forgotten when compared to the better tracks of the album. Speaking of the thrash, "To Red Ones" opens with a stomping rhythm not unlike early Sacred Reich or S.O.D., and maintains this veneer through the verses, as Krystof's vocals provide the deathlike hammering and a snarling, creepy counter vocal.

After this, the album actually picks up in quality, with its two best tracks in swift succession. "Tales of Your History" features a rolling, mystic rhythm before the choppy, mute and squeal bridge, but it's the intense riffing that begins before the 2:00 minute mark that catapults it over the top, with a freakish solo over a churning bass line and a thick breakdown to close which reminds me of Pestilence or Asphyx with van Drunen's vocals, arguably more brutal. "Touch the Sun" explores some bombastic melody over a killer old school death rhythm at 1:00. I also really loved the hook in the breakdown, and the thick morass of grooving chords that embarks thereafter. "Body as a Cover" is a solid, meaty death/thrasher with a few synth strikes in the bridge to herald the onslaught of another bottom end tank groove. "Parasites" has a similar intro, with a cutting guitar rhythm over turbid, bouncing volleys of bass, and it joins "Tales of Your History" and "Touch the Sun" as one of the album's best. Closer "About Death" builds some drama with a hefty if brief synth intro and some chug and squeal as Bruno goes mad on the four strings, and it's not a bad track either.

Orthodox is the new, improved brutality of Krabathor come to fruition. It departs from the thinner tones and additional slicing melody of Lies, but as for the writing it's not exactly a 180-degree turn. While I must admit the sinew of this album is more impressive from a mix standpoint than its predecessors, I do kind of prefer the atmosphere of Cool Mortification, and I felt Lies had stronger songwriting overall. Nonetheless, this is still an effective, and certainly heavy release for the Czechs which would undoubtedly appeal to fans on the more extreme end of slamming death metal. And there are a few tracks here which number among the band's career highs.

Highlights: Tales of Your History, Touch the Sun, Parasites