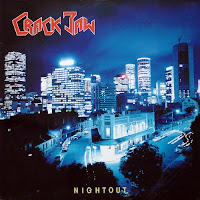 The cover to this obscure German band's sole full-length album seems a natural catalyst to conjure the aesthetics of big city street metal. However, it's not the type to cater to the stench of prostitutes, cigarettes, and puddles of vomit behind the local bar, but more of a metropolitan nightlife at large vibe. Rather than go all-out glam, the band had a dark, leather image to them. And the music itself was a surprise, because while it's not particularly good or interesting, it has a lot more control than many of the band's peers. A certain maturity and polish is applied to both the delivery of the licks and lyrics, both welcome on an album like this which existed in a world of sleaze as the metal scene was beginning to branch off into various constituent genres.

Not a lot of information remains today about Crack Jaw, and this was their only record released through Steamhammer in the 80s, but the band certainly had a potential that probably deserved a second shot, even if Night Out itself is not highly effective. A large fraction of the material here is the performed with the typical hard rocking power of the Scorpions, Accept, Judas Priest, and other big names of the day, but the band does show an exception or two in which they put the pedal to the metal and honestly start to kick ass. This is most prevalent on the title track "Nightout", which features some killer speed metal hooks that twist their way through the mid paced, thriving energy of the verse. "Galley Without Aim" also has a ton of potential, with some nice leads cutting across the bow of its mean beat. Stephan Kiegerl seems rather reserved to his median vocal range, but you get the impression that he could go off at any moment and start screaming like Peavey Wagner (in the earlier Rage years) or Michael Knoblich (from the first Scanner album). Kiegerl has that same, sharp metallic spin to his accent which made me so fond of other German singers of the decade, but he either doesn't have the balls to lay out the listener or he feared his vocals would decay too much once they hit the highs. It's a shame.

Had Crack Jaw fully embraced the screaming speed demon that was assuredly lurking about their hearts, Night Out would probably be a far more potent beast. As it stands, only about half of the album remains listenable to me. The aforementioned "Nightout" and "Galley Without Aim" are joined by the instrumental "Saracen", the lethal Accept-like rocker "Danger" and the wild power metal melodies of "Struck By Thunder" as the album's stronger moments. I don't like the vocals much on "Never Tell No Lies", but at least the guitars rock. On the other hand, arena fodder like "The Change" and "New Tomorrow" are all too forgettable, and the closer "Seven Days of Wonder" shifts from pure class to dull.

The lyrics themselves are rather weak, but this is only natural for many bands of the day, and Kiegerl manages to deliver them in an acceptable form. As for the mix, it's not quite enduring, but not bad if you're familiar with similar output. This is not a bad little album if you're tracking down material similar to mid-80s Accept or the earlier half of Sinner's discography, but it doesn't have the hooks or the memorable chorus parts to measure up against more popular metal-light albums of its day, and I would probably only recommend it to collectors to have a hard on for this period's prevalent diction. Crack Jaw have created an inviting city that I'd love to visit for a night. But I'll be on the first train out in the morning, without the usual hangover or regrets.