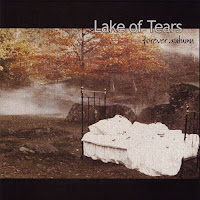 You don't have to look far to realize how Lake of Tears have cashed in their chips for this album. Start with the cover, which is a huge downgrade from the psychedelic brilliance of A Crimson Cosmos, and the painfully minimum logo/title font (though, to be fair, the band had abandoned their old logo on the previous album). Then work your way inwards. As with most 'dedication' records, the lyrics here all carry a certain weight over a fallen one, but it's unfortunate that the music is honestly the most bland of their entire career. After an album that I considered one of the most original, inventive pieces of metal music in the 90s, Forever Autumn is a staggering letdown which fails to even scratch at the front gate of their prior efforts.

To begin with, the album is far too tranquil, and dull. Seeing that the two previous full-lengths had some extremely accessible, radio ready songs like "Headstones", "Sweetwater", "Devil's Diner" and such, the band might have felt some pressure to tone down the excellent, hard rocking doom of the older albums so they could assert themselves more directly into the mainstream. This is a bluesy folk/rock album with only a few hints to the band's past, taking the clean guitars and spacious, Floyd-like writing to an unfortunate extreme. If I were at some country dance in Sweden, late in the evening, watching the lanterns and trees, deep in my cups and mourning a lost love, or letting some ancient regret rattle through my brain like a mouse in a hamster-ball, the mood might fit. But the tunes are still rather weak for a band that was crushing my soul like a counter-full of hallucinogens just two years before. At the heaviest, Forever Autumn does little more than recycle riffs from A Crimson Cosmos and try to pass them off in a more mellow environment. Some of the lyrical lines follow suit. The stagnant ennui of this album is such that I find myself grasping at straws to even think of a single track which I enjoy more than any other. It's extremely consistent at being boring.

In line with the heavier emphasis on its natural, bleak rural vibe, the band have incorporated a few guest musicians to perform accordions, flutes and cello, rather than just use a keyboard pad like so many other bands would. Thus, a somber string section serves as the opening to "So Fell Autumn Rain", which is a redundant ripoff of songs like "Boogie Bubble" and "Cosmic Weed" from A Crimson Cosmos, but with no crunch or power to the guitars, and a chorus which is far less the payoff than either of the aforementioned. "Hold On Tight" is a mellow piece with even further repressed riffs beneath the flutes, as Brennare's imagination sails down whatever river he's dreaming. The bridge vocals here sound a hell of a lot like the pre-chorus to "Devil's Diner" from the previous album, but in all, this is one of the more lulling pieces on the album, with some shining synthesized simplicity and the burning tears of the blues in the guitar solo. "Forever Autumn" is a wholly symphonic folk/prog flow reminiscent of Pink Floyd's later days. I wouldn't listen to if it were James Taylor or Tom Petty singing (both of which you can easily picture), so I'm not much in the mood to put up with it here.

"Pagan Wish" is perhaps the one point on the album where the band tries to re-assert the booming psychedelic aggression of A Crimson Cosmos, and it's good to hear Daniel returning to the higher pitched, more intense vocals, but once more it sounds like a mish-mash of vocal melodies and chords used from songs the band had already written, re-organized with an organ and spiky clean guitar and sent one more to press. "Otherwheres" is an instrumental opening in piano and acoustic guitars with an ambient backdrop, first dark and then sunshine, with synth orchestra erupting as a finale. I hate to say it, but it's perhaps the climax of the album. "The Homecoming" is another 'Last Dance With Mary Jane' meets Pink Floyd type of track, while "Come Night I Reign" tries to build a subtle gothic metal momentum through the storm of minimal chords and piano, which is the only payoff. "Demon You/Lily Anne" feels like a "Raistlin & The Rose" with the wind stolen from its sails, and once again you'll notice the familiarity of half the riffs in the song, which the lush synths are unable to compensate for. "To Blossom Blue" is an unnecessary, 8 minute bore which seems like any other rustic segue on this album stretched into an intolerable lament, graced with more of Brennare's self-referential lyrics ('where the sweet waters flow') and Floyd vocal arrangements.

It's truly a pity, this Forever Autumn, for all hopes of another crushing, psychedelic, emotional masterpiece were silenced for nearly a decade, and Lake of Tears started to experience a career turbulence that resulted in the band's temporary dissolution, and another pair of average albums (I might have enjoyed The Neonai and Black Brick Road slightly more than this, but I cannot sing the praises of either). I'm not sure if there were troubles with Black Mark, or internal band squabbles, or simply a lack of inspiration left in the well. It's not entirely terrible, and it's not the end of the world, but Forever Autumn doesn't even register when I'm facing a dreary day and looking for some aural candy to take with my tea.

Verdict: Indifference [5/10] (and the season of the fall begins)