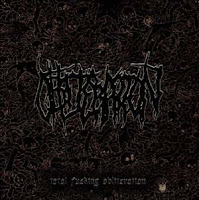 Norway is hardly the hotbed for death metal, outside of defunct acts like Molested or the chugging carnality of Kraanium. But there are notable exceptions like this one. And though we've since been graced with two of the band's pummeling full-length statements of sluggish old school, morbid death metal with a swamp/tomb atmosphere, Obliteration's initial EP release Total Fucking Obliteration is also worth writing home about. It sets up the style of the ensuing works quite well, but the four tracks here are representative of a far more straightforward sound, evoking the destructive simplicity of early Pestilence, Cannibal Corpse, Death, Napalm Death, Suffocation, Malevolent Creation, and the like.

I should note that of the four tracks here, the final two have a more death/thrash technique and feature an appearance by the great Apollyon of Aura Noir. I actually found myself gravitating towards the music in these tracks a little more, since the riffs are stronger and woven with a primitive technicality that spuriously complements the breakdowns and the brutal vocals. But I actually didn't care for the change up in vocals, and might have preferred them if they stuck with Sindre Solem's gutturals throughout. "Total Fucking Obliteration" itself is the one favorite though, as it rollicks along at an early Pestilence pace, a punishing groove fit for both the moshpit or mortuary slab. "The Smell of Rotten Entrails" is suitably horrific, with a mild grinding edge to it and a slather of snarls accenting the grunts. "Baptized in Vomit" features a truly old school low-end waltz of the dead, spritzed with explosions of abortive turbulence. Instantly it whisks you away to the nightmare world of the early 90s, when death metal albums were rolling out their creepy covers and the lack of internet/instant information made it all the more gloomy.

The Total Fucking Obliteration EP is not as inspiring as the full-lengths Perpetual Decay or Nekropsalms, in part because the band actually develops the style of this short play into something more immersive and original that shouldn't be missed. But if you're merely looking for old school worship done justice, then there is no reason to scoff at this earlier material. The experience might last only 13-14 minutes, but that's just enough for whatever elder god this band is conjuring to tear through the fabric of sanity and wrench your mind from its socket.