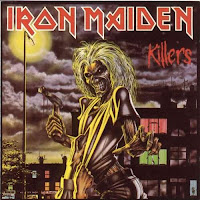 Iron Maiden's sophomore effort Killers is such a good ole gem that I often dream of what the band's career would have been like had they held on to Paul Di'Anno (and Clive Burr) forever. Perhaps there may never have been a Powerslave or Piece of Mind that was quite the same as those that front Dickinson's powerful pipes, but it's not hard to understand why some of Maiden's fans have eventually divided into two camps: those that prefer the 80s Dickinson streak of genius, and those that believe the first two albums represent the band at its most vital. Although I clearly belong to the former camp, with almost all of my favorite albums involving Bruce's vocals, I have grown very fond of the first two albums with age. There is just no denying it...if you want to hear Maiden at their closest to the 'pack' of the raw, pure NWOBHM bands, Killers is a monumental record that was nearly without peer (if you discount a few bands like Judas Priest), which took the infectious energy and good hooks of the s/t debut to a new height. It's also the first album by the band that I actually got into as a kid...

And it is one badass album. Where later Maiden efforts howl at you through the winds of history, the realms of the imagination or the shimmering neon streets of the future, Killers takes you from the shadows of the back alley of the sprawling 80s metropolis, lunging at you with a rusted cleaver, cackling with glee. That's not to infer that it ignores the band's old penchant for lyrics based in science fiction, horror and history. But compared to an album Somewhere in Time, Killers is just low down, dirty and mean, without totally lacking that melodic kick in the pants that made this band a household name on planet Earth. I can't blame Di'Anno for any of the drug problems he may have succumbed to while helping to conceive or tour off this album, because I honestly feel like taking a snort or two myself and tracing it with a draft of something dark and lethal proof when I listen to these songs.

Don't let the short-lived majesty of "The Ides of March" deceive you, because "Wrathchild" comes storming out like Jack the Ripper posteuring as a Hendrix or Page. The riffs groove and stomp while Di'Anno weaves his old catlike sorcery like a dirty man that knows he's about to score with every whore in the pub. Mind you, I mean this only with the sincerest of compliments, because if anything, Killers is the most 'sexy' Iron Maiden album. Denim and leather, spikes and booze, this is heavy metal music and it is not ashamed. "Murders in the Rue Morgue" devours you with terse seconds of tranquility, before the sparse chords ring out. I'd almost call the fast paced verse of the song 'uplifting', considering the Edgar Allen Poe story it was based on, but regardless, it is one of the best fucking songs this band has ever played, and I've got a lawn that wants you to kindly step off if you don't agree! Flighty, fun solos and an unflinching, dark boogie to the chorus assure that this is likely a standard on every Jukebox in Hell. Do you seriously think the Devil listens to Deicide or Akercocke? Because he doesn't. He listens to this.

Reminding you that metal is in fact just a more abusive form of rock and roll is the wailing bluesy taint that intros "Another Life", a hammering joint that features a nice echoing spin to Di'anno' vocals, and a stream of bleeding melodies over the plunking pumpkin bass of 'Arry. I was only about seven years when this damn thing came out, but even then I was jealous of what high schoolers must have done with their sweeties behind closed doors when this thing was playing, because it's hot like melted wax. "Genghis Khan" is a ripping instrumental with some savage, pumping guitar rhythms that easily transport you to the fields of conquest that its titular figure once grazed upon. And at 1:00 minute, the song becomes GO TIME, as in bang your unworthy head you sodden fuck! "Innocent Exile" finds an amazing medium between the band's hard rock blues grooves and titillating sense for raucous metal melody. Combined with the badass, on the run from the law lyrics, I cannot help but envy the outlaw, the trucker, the motorcycle man, or any other marginalized stereotype the song evokes within me.

And lo, though the album had by this point long since earned its keep, it is far from finished with you. "Killers" introduces the unforgettable, solemn and steady bass line bristling with quiet guitars before the forward trot below the harmonic debauchery, and then the chorus which is like a mighty punch in the groin that would fell a hundred Goliaths. This functions better than "Eye of the Tiger" by Survivor as a psyche-up for a fight, sportlike or to the death. After this, "Prodigal Son" surprises with its river rolling, homely clean guitar tones and Di'Anno vocals that cut through the night like a a radio in a lone trucker's cab beneath some twilight, open desert. Might not be as heavy as the rest of the album, but it still kicks a severe amount of tail. "Purgatory" is a nice early speed/power metal number with a fierce and unforgettable chorus that sails across the abyss like a beautiful hell-kite, aglow with subterranean lightning, and "Drifter" features that sick, descending guitar line intro, though as much as I enjoy the song, it might be the one thing here I don't find entirely captivating or perfect.

Of course, being that I had the US release, I was also entreated to the delightful "Twilight Zone" in between "Killers" and "Prodigal Son", and what can I say...it's a perfect track with more of Di'Anno's, excellent echoed wailing, and one of my overall favorites on the disc, with guitars that burn straight past your defenses into your metal soul.

Killers is certainly a strong case for the original Maiden being every bit the contender that its next incarnation would prove to be. Proof that this is one of the few bands to easily weather periods of two distinct, excellent vocalists (but not three, sadly). But beyond that, it is one of the very best of the early 80s heavy metal offerings, with songs and production that have survived, intact, through almost three decades. I don't appreciate every waking second of the album with equivocal lust, but it's fantastic, and easily one of the band's better efforts. If by some anomaly you have yet to avail yourself of its charms, I suggest you make it so, lest you feel the burn of eternal shame as the rest of us avert our eyes from you, avoiding you like a bearer of plague.

Highlights: Perhaps the heaviest album of all time to feature the word 'cuddle'?