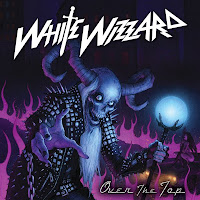 If it's any indicator that traditional 80s heavy/speed metal is returning in full force to the world, White Wizzard's full-length debut has been released through Earache, one of the labels which always seems to keep their ears on the pulse of the swank and hip. White Wizzard are quite the new band, too, having formed only a few years back but already produced two EPs. These guys play it pretty straight, a hooky brand of old school power/speed metal which sounds like it might have been right at home on the Metal Blade roster in say...1985 or 86. You'll hear the usual culprits in the band's sound, like Judas Priest, Iron Maiden or Manowar, but also a number of other influences here like Virgin Steele, Armored Saint, Riot, Omen and perhaps even a dash of Savage Grace.

Vocalist Wyatt 'Screamin' Demon' Anderson has a secure enough vocal style, kind of a mix of Erik A.K. Knutson from Flotsam & Jetsam and maybe a little Mike Howe (ex-Metal Church, Heretic). At first I was worried this was going to be another of the soulless cash-in bands which seem to exist simply to push the current trend into a retro space, but White Wizzard seem fairly capable if you're a fan of the early years, and perhaps even if you're brand new to this genre. The guitars are melodic and sincere, and though I'm not always keen on the vocals, they occasionally sound great with the backups and take you straight down nostalgia lane.

The question is really if these vocal and guitar hooks are strong enough to create distinction among your already crowded record shelf. "High Roller" has some decent Iron Maiden-like (or Omen-like) harmonies and leads, perhaps the best on this album, but they're not entirely captivating, nor is Anderson even at his highest pitch. "Over the Top" is fast and highway fueled rock that channels a little Judas Priest, but the cheesy lyrics didn't exactly thrill me. Some of the better songs occur later on the album, like the rocking "Strike of the Viper" or "Death Race", but even these suffer from a string of cliche lyrics that often induce cringing in the seasoned listener. Hardly offensive since it's unlikely anyone is going to take a band called White Wizzard very seriously in 2010, but still, if the band had affixed this very same music with a more poetic aptitude, would it have hurt? Who would complain?

That said, none of the tracks are unappealing musically, from the bouncing high speed and wailing, spritely melodies that paint the ceiling of "40 Deuces" to the band's darker namesake track which completes the album, and reminds me a lot of Howe-era Metal Church. I'd also point out that the band doesn't offer any cheap ballad here, and as if to prove their hearts are in the proper place, the limited edition features bonus covers of Cloven Hoof's "Gates of Gehenna" (from the 1984 s/t album) and Judas Priest's "Heading Out to the Highway" (from Point of Entry in '81). Neither is a superb translation, but they're at least some evidence that the roots of the members' tastes run fairly deep into the past.

I did not get much out of Over the Top, save the opinion that the whole retro appeal is about to blow up and that I can expect to hear a lot more like this on the horizon. I actually preferred Finland's Armour s/t debut because it feels a lot more genuinely cheesy and absurd, and also rock a little more. But White Wizzard have a reasonable ear for melody, and I've heard far worse, both in these 'new 80s' and the original 80s.