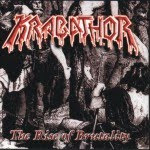 Coming off the Cool Mortification LP, things were looking up for the Czech's finest representative of the pure death metal genre, and the following year they produced The Rise of Brutality demo, which would feature few of the tracks for the upcoming Lies album in 1995. In that same year, the demo was given a 'legitimate release' with a new intro tacked on, and in 1999 it was re-leased again with a pair of bonus tracks, reworkings from the band's earlier demos. It is this last version of The Rise of Brutality which I am reviewing here.

The first thing you'll notice is that, without abandoning the style of the previous record, Krabathor had gotten faster and more melodic. Whether this was a response to the then-trend of the Scandinavian black and death is unknown, but it still falls in line with Cool Mortification, though after the intro I found the songs to be somewhat less atmospheric. Regardless, the three new originals found on this EP are among the band's very best. Fast, impulsive, and blazing with a poppy distorted tenor to the bass, certainly this was a step up with regards to intensity.

"The Rise of Brutality" intro is nearly 2 minutes of bleak, horrific dark ambient soundscape that leads into the longing melodic salvo of "Pain That Doesn't Hurt", swift to invoke several thundering rhythms, including the hyperblasting of the pre-chorus, with its scads of rabid, punctual guitars that remind me of early Atheist meets early Pestilence. "The Truth About Lies" seems almost an extension of that song, with a lot of thrust and a rather melodic breakdown akin to "Hangar 18" or something, before the decent (but brief) lead. "Unnecessarity" is even more rampant, and I personally enjoyed the violent thrashing, fast pace of the song, not unlike Sadus.

The final two tracks on the EP are "Pacifistic Death" and "Total Destruction". The first is a different version than what you'll find on Only Our Death is Welcome..., and in fact more of a brutal rendition of the original from the band's 1991 demo Feelings of Dethronisation. I have to say that I rather enjoyed this version, it's unforgiving and raw as fuck. "Total Destruction" is another demo track, opening with a copious stream of bass before a pretty killer thrashing rhythm erupts with a forceful blast of bass and guttural secretion. There's also a breakdown thrash riff with some samples over it for effect, and a nice lead section. It's quite a good song, and another of the few reasons to own this release in its extended version.

Sadly, some of the overall value here is lost in that "The Truth About Lies" and "Unnecessarity" are appearing on the band's 1995 album. But just for the intro, the revamped demo covers, and the originally named "Pain That Doesn't Hurt", it's well worth hearing in its later, 1999 format if you've enjoyed the previous full-length Cool Mortification or you simply enjoy a blast of fresh 90s death. These are still some of Krabathor's better songs. The core of the EP, including the intro, was also released as a split with an obscure Russian band Pandemia.