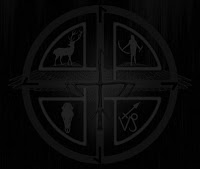 Blood of the Black Owl's previous meditation, A Feral Spirit, was a haze inducing ritual of both beauty and terror, as extreme as it could be tranquil, and really promoted the band to the forefront of our metal scene's peripheral artists, capable of a vision far outside the status quo even in such eclectic genres as black, doom, drone or folk metal. There is simply not much else out there that can capture the repressed spirit of native America in musical form, and place such a tax on the soul of the listener. For A Banishing Ritual, the reins seem to have been tightened a notch, partly due to the fact it consists of a single track in four 'movements', all of which combine for 40 minutes of intense immersion that can drown out your day.

Chet W. Scott (of Ruhr Hunter and many other experimental projects) returns here with collaborators James Woodhead and Daniel Ellis Harrod for a lengthy, disturbing journey. Into the trials of jarring strings, black swelling ambiance and chant-like, ritual vocal we are taken with the first of the tracks motions, 'Intent', which is possibly the most fascinating of the album. "The Statement of Will (Movement II)", which occupies only about 4 minutes of "A Banishing Ritual", opens with an extremely basal, raw doom metal rhythm that is soon bypassed by a montage of eerie woodwinds, ringing strings and carnal vocals, only to return to the guitars for the transition into "Chant of the Captured Spirit (Movement III)", which is the most ominous of the album's stages, 11 minutes of slowly escalating noise, warbled voices and warped synthesizers that tide over into trilling flutes and soothing, daemonic whispers. "The Final Banishing (Movement IV)" grows from this into sparse, further fucked whispers that are cut through with occasional jaunts onto an acoustic guitar, distant shrill synths that emulate the whipping winds of perdition and a climactic finale which feels like being hunted through a cold Northwestern night by regressive cannibal savages.

Like any successful work of its kind, A Banishing Ritual sucks the listener into a vortex of the unfamiliar and then peels away each layer of sanity from his/her stiff mind. I didn't actually appreciate it quite so much as its predecessor A Feral Spirit, but that is partly owed to the single track format...I simply didn't feel compelled by its entirety as I did with many of the songs off the prior release. Regardless, it's highly engrossing and I am very eager to experience this when hiking season begins for me in the summer. A wondrous, though not always pleasant soundtrack to the empty places of the wild (and the soul) untouched, at least temporarily, by Quiznos, Verizon and Lady Gaga.