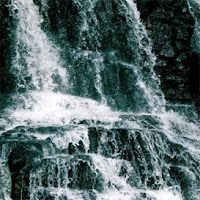 Tanner Reed Anderson, Timothy Glenn, and Jason Walton (of Agalloch fame) return for their 2nd full length outing on Bindrune Recordings, and being partial to the great debut Desolate North, I had extremely high expectations going into this effort. Perhaps the stars are not perfectly aligned, or the value of its charms have simply yet to fully sink into my skull, because where I found a near complete rapture on the split with Blood of the Black Owl or the debut, I occasionally felt tedium during several of the 56 minutes of Where Life Springs Eternal. It's a good listen, and given the chance, it should immerse you almost as hopelessly as its predecessor, but the two often feel like day and night. And it's always a little easier to concentrate in the dark.

Now, Celestiial are not your average band playing doom or 'funeral doom' music, though some might argue that the spacious phrasing over the slowly crashing drums here is just as monotonous. No, this band is very true to their original, natural vision, to explore the vast and beautiful countryside of the United States through sonic improvisations. Desolate North was an excursion into both the minimal and gentle plucking of the guitar and the more dense, cerebral, violent compositions, and Where Life Springs Eternal is not the fruit of an entirely separate tree. The tracks presented here are diverse and improvisational, but more like a brazen, naked man parading about the places in the Land yet uncorrupted by civilization, spreading his arms wide and howling at the waterfalls of the cover image, his voice joining with the loud music of the atmosphere. It's simply not as creepy, even when it tries to be.

"Spell Over Still Water" is loaded with cascades of rushing rapid samples, feedback and noise, kind of like Nadja but with less of an intent to create harmonic abstraction. It attempts nothing. It simply is. "Great Storms Carry My Sadness" is perhaps the most depressing piece on the album, with waves of guitar and reverb that carry themselves across canyons and skies, Tanner's voice completely tortured like the Earth itself where it is marred and razed by the progress of mankind. It's also 30 fucking minutes long...so you'll have plenty of time to think about it. "From Elm Blossoms a Rose" feels a lot more purposefully arranged, as samples of water complement a gently lulling piano, but "Offering in Cedar Smoke" is another lengthy number which returns to the band's gripping emotional turmoil, Tanner's black rasp haunting over the swells of guitar volume knobs, crawling cymbals and flutter of birds. "Songbirds Depart Through the Passing Near the Garden" is a short, somber closure to the album, moodily struck pianos and acoustics that send warmth down your spine as you settle yourself in the Earth.

I've got some mixed feelings about this sophomore effort, though ultimately the positives outweigh the moments of repetitious ennui that arrive through the longer compositions (or 'non-compositions'). Granted, those moments are likely intentional, and a band like Celestiial is not something you listen to if you're expecting riffs, melodies, or anything even bordering on traditional metal. This is the sound of the spaces between the music, as if you could pause time and meditate through each natural high and low. Desolate North was a lot darker than this, with shorter songs, and I believe I still prefer that side of Celestiial, which fucked me up but good. That's not to say Where Life Springs Eternal is all bells and whistles. It's hardly an uplifting experience, but the album title alone dictates that it's heart must center about some faint trace of hope.

At any rate, Celestiial do maintain their rare ability to create a sonic response to their environment, and this is one of the few 'nature' oriented bands that amounts to more than a busload of hippies that are as full of shit as they are full of marijuana and other medications. Where Life Springs Eternal may not be the most essential of listening, but it is still quite intriguing, and the next time you get an urge to listen to one of your soccer mom 'ambient sounds of the
Posted by autothrall at 7:03 PM