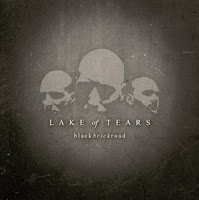 Whereas The Neonai was written and released in order to flush out the contract Lake of Tears had with Black Mark, Black Brick Road was the band's true 'reunion' album after the band split a few years prior. It was released through Noise Records, who for all purposes must have been nearly defunct in the 21st century, though they dominated the 80s with a roster comprised of many of the greatest metal bands in history. The band remained a 3-piece here, with a few guest spots to round out the album, and once again the band had made a minor departure in sound.

Black Brick Road is an interesting work, but not a very good one. The band makes an increased use of electronics here, and the result is that the album occasionally feels like so many other gothic/electro metal bands, such as Theater of Tragedy during their Musique/Assembly phase. It's not quite as disappointing as the band's 1999 album Forever Autumn, but there are very few songs here that I enjoy to this day, and it doesn't seem to age well in general. What the album lacks most is heaviness. Lake of Tears are no strangers to an inclusion of pop and psychedelic rock elements into their music, but at best they had always had those hard hitting tracks to fall back on, like "Burn Fire Burn", or "Raistlin and the Rose", or "Cosmic Weed". Here on Black Brick Road, not so much.

"The Greymen" at least anchors itself in a very basic chord sequence, but the silly keyboard line is distracting and the more bluesy, tranquil moments of the verse where the band uses clean guitars and a sparse, bluesy lead are all forgettable. "Making Evenings" is easily my favorite song on the album, due to the trailing guitar that gracefully drifts across the dark backdrop of the chords, and the vocals of the chorus are simple but soothing. There aren't any other tracks here that can match it, but it makes for a nice preamble to the band's 2007 shocker Moon and Mushrooms (i.e. the boys are back in town). "Black Brick Road" is another of the band's country/folk rock departures which could just as well have been written by Tom Petty, takin a spin into Pink Floyd territory in the late bridge. "Dystopia" is similar to "The Greymen", as it too features a rather grating electro goth-pop line on the synth, and a shrill, goofy keyboard that functions as the background of the verse. There is no real payoff here, as the chorus is just the opening volley with added female vocals. Some of the vocal lines in the verse also feel redundant to past tracks like "Devil's Diner". The lyrics are also terrible in this one:

Thank you, Sigmund Freud, for the profundity of such obvious sentiment. "The Organ" is the most mellow of the album's tracks, a bluesy Floyd-like floe of clean guitars, organs and a steady beat. It's not a bad song, but once more there is just no payoff to be had. No surprise, no sudden turns, swollen with its own simplicity. "A Trip With the Moon" moves along at a "Keep On Rocking in the Free World" pace, and I kept getting mental imagery of Tom Petty singing while Young played guitar. The chorus isn't bad, and continues to escalate as the track proceeds, but once the load is blown, there is nothing to await you in the afterglow except for a cheesy synth. "Sister Sinister" features a new female vocalist (no Jennie Tebler here), Stina Rebelius, and it's an interesting rock track with a nice, Girlschool-meets-Mazzy Star vibe to it. But the problem is that it's just not Lake of Tears until Daniel shows up in the chorus.

"Rainy Day Away" sounds very much like an outtake from A Crimson Cosmos, basically a combination of "Boogie Bubble" slowed to the tempo of "To Die is To Wake" (it even self-references "Boogie Bubble"). Unfortunately the band did this better when it was the two individual tracks that it is attempting to bridge, and thus "Rainy Day Away" becomes the forgotten edition. The closer "Crazyman" is honestly one of the better tracks, so it's unfortunate that it is tucked away at the end here. A steady rocker with vibrant organs and a nice, low-end bite, once again this is a track that seems to foreshadow the band's following album, where they will take this formula and absolutely crush with it ("Children of the Grey" is very similar, but godly).

It's a little hard to find the praise for an album like this when the band is capable of so much more, both on their past and future works chronological to this. Black Brick Road doesn't suck, but it feels as if it takes the easy way out on a number of tracks and there is hardly a memorable moment to be had outside of "Making Evenings" and perhaps "Crazyman". That said, this doesn't suffer from the obtuse boredom of Forever Autumn either. The songs are flighty and for the most part fun, just the sort of fun you have at the local annual outdoors Faire, stuffing your cheeks with cotton candy, kettle corn and corn dogs...and then forgetting the experience once you achieve the following morning's erection and ready yourself for work.

Verdict: Indifference [6/10] (heading for the heart of a different sun)