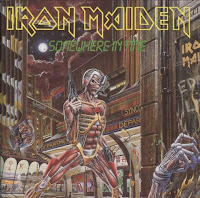 How to grab autothrall by the balls and never let go: Adorn your album in a swank, futuristic city scene on a wraparound cover, loaded with little details and 'easter eggs' that not only affix to various cultural references, but also to some of the songs on the album and other self-referential overtures. Make sure Eddie is present with lazer gun and pecs, having gone all Blade Runner through cybernetics and a will to kill. Next, make sure you include eight of the best songs your band has ever written, with a truly surreal, progressive tinge of processed guitars, lyrics dabbling in contemporary science fiction, or in the lives of sweeping historical figures, or other various films or stories. Add a little synthesizer and wash it all out in the reverb-heavy 80s production values that are sadly lacking in today's...forward movements in sound.

Congratulations, you've got two testicles in a vice. Be careful with them. With great power comes great responsibility. 666 may be The Number of the Beast, but 6th is the album I hold before me, my personal favorite of the band's entire career, ever so slightly edging out the also-flawless Powerslave. And I'll come clean, it's largely due to the particular nostalgia I have always felt for Somewhere in Time. My go-to album. My desert island affair. And one of the most outstanding pieces of recorded music I have the privilege to own. The most 'classic' lineup of the band: Harris, Dickinson, Murray, Smith, McBrain, all out in finest form, reaching deep into their collective imagination to produce a masterwork of poise and polish, a progressive half-step between the swashbuckling fortitude of its predecessor and the gleaming psychological vistas eschewed by the following Seventh Son of a Seventh Son.

It honestly surprises me at times that I fancy this album so, because when I usually think of the aggressive, classic Maiden, the first sounds that come to mind are always those staples of other albums like Piece of Mind or Killers, "Aces High" or "2 Minutes to Midnight". And while Somewhere in Time does wear some related footwear to those last two, there is some subtle nuance to the writing here which ever compels me into its dreaming, reflective vistas of expression. This is the best album when it pertains to a complete experience. There is no other which feels as right to play for 51 minutes straight, track 1 all the way to 8. Some might argue that it lacks the power or emotion of several other Iron Maiden offerings, but what better emotion could be evinced from a work of metal music than an all-expense-paid immersion into the future and past, 'A Christmas Carol' with Eddie at the helm in place of a trio of cautionary phantasms.

A cheesy yet extraordinary synth serves as an aegis to the carefully construed melodies of "Caught Somewhere in Time", soon to disappear under the momentum of the band's triplet charging madness, and Dickinson's crystalline, wavering tones that spin a yarn of two travelers in time, the one goading the other through an infinity of windows and adventures. Sure, the chorus is as daft and obvious as the song title, like you'll find in about 95% of all music, but it delivers. The bridge work here is phenomenal, with gorgeous melodic lines cascading about the mid-paced thrust of the bass and rhythm guitars. It doesn't hurt that the band is about to follow with what might be one of their single best songs in history. I refer of course to the tantalizing, signature volley of notes that introduces "Wasted Years", a song with a surprisingly blue-collar, rocking ethic to the verses that feels not unlike other hard rockers of the 80s, Saxon or Def Leppard, albeit with Bruce at the helm. But the chorus is beyond unforgettable, with the layered vocals shifting over some of the most simplest and life affirming chords in all metaldom.

If only we could bottle up the emotional resonance of that song, and take it with us, to drink all our days and forget the ravages of mundane existence. Oh, it's called an .mp3 player? "Sea of Madness", one of the lesser known tracks of this album (shocking, I know) emerges next from the phlogiston, with a nice interplay between the cheesy synth and guitar in the verse, and another siren-like, inescapable chorus that turns us over to the bump and trot of the 2nd verse. There's also a pretty lowdown and moody passage that cycles through the center of the track, if only to bring back the powerful reverb of the guitars once more. "Heaven Can Wait", like "Wasted Years" is one of the most accessible, or radio-friendly pieces on the album. Surprisingly, did not rate a video or single back in those days, but the scorching chorus of vocals, ringing melodic guitars and lightly seasoned backup synth will surely create a sensation of warmth through your being long after the fire of the solo has died and the bass swerves us out.

The second half of Somewhere in Time is all the more pensive, beginning with "The Loneliness of the Long Distance Runner", a psychological study of the film and book of the same name, and the very act of extreme athleticism which they involve. But this is no "Rime of the Ancient Mariner", and though the lyrics might ponder, the music races along with the band's usual index of melodies and forceful rhythms, including the epic lead break at 3:30 which every goddamn power metal band since just wishes they could have written first. "Stranger in a Strange Land" is sadly only a reference to the Robert A Heinlein novel in name. However, the story of an arctic explorer finding a frozen body is deep enough to satisfy, especially when one can put yourself in the fictional skin of the character and think of the lyrics from a first person perspective. There is a nice, proggish blues moment in the chorus where the guitars paddle along through the timestream, and the bass accompanying the solo break is a delight.

"Déjà Vu" leads down further paths of flight, wonderful harmonies erupting one of the more powerful verse rhythms of the album, with Bruce dishing out some of the more venomous tones as he careens towards his glittering chorus 'Feel like I've been here before'. I can assure you, no, Iron Maiden has not been here before. The marching drums and hammering guitar of the bridge leads into another soothing triple melody with the guitars and synth. The album ends with the 8 and a half-minute historical epic "Alexander the Great", and the riffing represents various elements of the man's life. War, politics, ambition, and glory can all be felt through the guitar patterns, yet the lyrics are played pretty straight, a simple narrative of the figure's acclaimed destiny. Before 4:00 the track goes a little awol into prog rock territory, you may feel a little 80s Rush or Yes in this, which of course serves as an omen of their next album. After that, some great, moody percussion and slowly wound leadwork arrives like a soldier on an elephant, and it all ends like the closure of some mighty procession.

If you can't tell the forest for the trees, Somewhere in Time is mandatory listening, whether you dabble in Maiden on a regular basis or you're some curious child, or perhaps you've been doing missionary work in some exotic land for the past 24 years and hadn't had any access to this particular treasure vault. It's neither the heaviest of the band's efforts nor the most remembered by the howling masses at their live gigs, who seem to content themselves with just a hit by hit track-ography of all their classic albums, but damn, what I would pay to see the band perform this in its entirety. This is actually the last of the band's 'crucial' discography. Seventh Son is a Seventh Son and Brave New World are both great, don't get me wrong, but if I was forced to choose sides and sharpen the band's career to the very finest edge, it would begin with Killers and end on the final notes of "Alexander the Great".

Highlights: 24 years worth across 51 minutes.