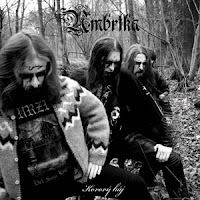 The previous album of the prolific Umbrtka, Úplná Demontáž Lidstva was a journey through societal and urban decay, which made use of extra-traditional instrumentation and industrial noise to produce a curious and unique result. The sound was not entirely distanced from Lord Morbivad's better known sewer black band Stíny Plamenù, but it was more abstract and ruefully more interesting. So I am quite surprised, then, that the 15th Umbrtka album has arrived in the form of a mellower offering with a lot more emphasis on acoustic folk music...and not bad, at that. But when a band is releasing albums as often as this one, I guess it doesn't hurt to change up the formula every now and then, and Umbrtka have certainly made such rapid deviations in the past.

For those worried, fear not, because there are still plenty of metal passages on Kovový háj, and when they appear, they are likewise well furbished. With 7 tracks at 55 minutes, there are a few here which are quite hefty in length, and not always supportive of their vast borders, but all possessive of at least some degree of charm. I was immediately taken in with the opener "Chrám těla (Temple of Flesh)", an immersive, acoustic experience which plays out like an overcast day in some tranquil glade, near the flow of water or an edifice of rock, all hinting at deeper mysteries of the world below as you study them. I hate to use the term 'zen' to describe its effects, but that was the ultimate result. The 9 minute title track ("Metal Grove") benefits from layered, soothing vocals and spikes of electric notes that flow above the twinkle of the cleaner guitars and the fervent, infectious swells...this is simply an amazing song, one of the best on the album and wholly recommended for its natural, psychedelic interlacing. "Slovany" may deceive one into thinking its another folk track, but it erupts into an amazing, atmospheric black metal laden in dense melodies and vibrous atmosphere.

For other aggressive fare, seek "Rodina" with its primal black/doom leanings that work in tandem with its flowing streams of acoustic guitar and sombering melodies. "Onen večer (That Evening)" is perhaps the most bizarre of the compositions, with a myriad of vocals that range from eerie black rasping depths to a freaky folk side. Granted, it's almost 15 minutes long, and could very well have been a number of separate tracks, but there just might be enough here to compel the listener without raining tedium upon him. Also included are the elegaic, sombering "Na lásku (For Love)" with its ringing, excellent guitars that feel like a funeral march in a still photo, and the rambling, twangy "Vrby (Family)" with a memorable pattern of guitars.

I was a little taken aback by the album, not expecting much more than another odd cityscape, but Umbrtka successfully translate themselves into a more rustic environment, and write some killer folk/ambient/black metal that should appeal to any with an open mind who can stomach the native Czech tongue. Hardly a stumbling block when the reward is as worthwhile as this. Impressive.