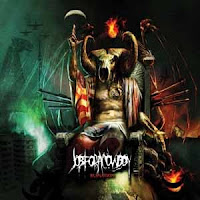 Between their first full-length Genesis and its 2009 followup Ruination, Job for a Cowboy have had a few line-up changes, with Al Glassman (Goratory, Despised Icon) and Jon Rice joining on guitar and drums, respectively. Whether this had any effect on the band's songwriting process, I can't say, but I've wound up liking this album less than its predecessor, though it still stands tall above the band's debut EP Doom. It's not a matter of the music shifting in style, because the band is still verging far more on the 'death' than the 'core' elements of their earlier sound, and the riffs written here remain fairly athletic and complex.

It's simply that what is written here is less memorable, aside from a few tracks where the band flies off the handle to induce a headbanging frenzy akin to several of the Genesis pieces. For one, the album feels mildly less atmospheric. It lacks the cool atmosphere of the last, due primarily to its lack of instrumental dark ambient/industrial/horror interludes. With the exception of "Ruination", the closing title track, it's a pretty straight shooter of modern US brutality which reminds a lot of other young bands like Revocation or Odious Mortem, only with a lot more mosh stomping and a lot less of those bands' high quality riffs. The vocals here are the standard grunts and rasps of Jonny Davy that you know form the past releases, but I would actually say he has overall improved, especially on the painful delivery of the upper register snarling. The band are in pretty fine form...it's a tightly wound and well executed slab of death metal and proficiency. But the last album had a few tracks that seared themselves straight onto my brain, and this just feels like an exercise in violent neck injuries that grows slightly tired before the 40 minutes are up.

"Unfurling a Darkened Gospel", which was presented as a 'single' for this album, begins with the good intentions of a hyperactive thrasher, with some intense drumming and a battery of riffing that falls somewhere between the manic bombast of Theory in Practice and the bludgeoning deliverance of a Severed Savior or Deeds of Flesh. The solo bridge sounds quite good over the bustling, thrashy barrage of rhythms, but otherwise there is nothing here that stood out aside from the obvious competence of the musicians. And it's much the same with "Summon the Hounds", save for the slight grooved edge to its tempos, and "Constitutional Masturbation", which manifests the same mixture of blast beats, acrobatic death/thrash rhythms, pummeling chord breakdowns and low end octave chords, quite akin to something Hate Eternal might pen. There are a few catchier tracks as the album progresses, namely the huge, swaggering of "Butchering the Enlightened" or the spastic bounce and grind of "Psychological Immorality", or the more spacious, eerie environs of "Ruination", but even these do not summon a lot of confidence or add much replayability.

The mix of the album is top notch, with a thick, present bass that subsists wonderfully beneath the dual guitar punctures and the intense drumming. This guy certainly got himself a workout, but then again, it's what most expect out of a tech death metal or deathcore drummer these days. There's not much negative to say about Ruination except that the majority of the tracks fail to deliver a sequence of notes as an injection to the gray matter. It sounds sleek, and may still appeal to fans who just want a high quality mix of punching rhythms they can dance or bang heads to. Certainly you could listen to this and acknowledge it's brutality, but by now this has already done so many times that the songs really need to be stronger to stand out from the massive crowd of peers. It seems this cowboy's 'Job' has gone from a rodeo hopeful to filling the troughs and shoveling the bales of hay.

Verdict: Indifference [6.25/10] (cast down the frail and throne the elite)