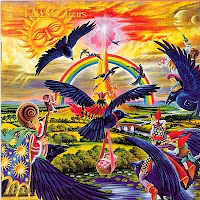 Lake of Tears' 5th album The Neonai took me quite by surprise, as the band had split up after releasing Forever Autumn. Having heard how unimpressive that album was, I might have made a similar decision. It was the right decision. So there I was, perusing an online catalog to place a CD order, when I realize there is a new title from Lake of Tears, called The Neonai. Some sort of posthumous release that Black Mark released for a quick buck? No, apparently the band had enjoyed their vacation and were back as a three-piece, without the keyboard player from the previous album. A few days later, the CD was mine, and I was very delighted to find that the psychedelic artwork had returned, in a brighter fashion.

Things were looking up, and I had every ray of hope that the band would return to the style of A Crimson Cosmos. For the most part, they had, but in the most laziest of fashions...by almost repeating themselves several times here. This is a crime the band had committed slightly with Forever Autumn, so it was disappointing to hear songs so similar to others the band had already etched out. However, a few of the cuts on The Neonai are pretty unique sounding, and they also happen to the be the best here. It's a marked improvement over the prior album, with a return to the more crushing guitar tones and the warmth of the band's 1997 material, but still fairly inconsistent, with a few songs that can be downright annoying.

A synth-driven intro heralds the electronic drumming pulse of "Return of Ravens", and you'll immediately that this is somewhat of a departure, using more symphonic keys with the guitars serving only as a salad dressing. But lyrically and vocally, it is very much a natural continuation of A Crimson Cosmos, and the band return to the avian mascot they once spoke of on their first two efforts. A very simple tune, but not a bad one. "The Shadowshires" is one of the best rockers on the album, though it continues the very tight percussive reign and incredibly basic guitar lines that function as a propellant for Brennare's memorable vocal lines. Again, the keyboards play a more prominent role than on the band's earlier work, but this too is one of the better songs. "Solitude" is a rustic, sad folk ballad with some synthesized pipes and a fairly predictable surge of chorus chords, but though I didn't develop much of an attachment, it's at least the rival of almost any song on Forever Autumn, though some of Brennare's verse vocals feel like his lines from "Red Rosenred" stretched wide. "Leave a Room" is great, with a nice psychedelic buzz to the synth (or possible guitar) effect that opens the verse. Jennie Tebler returns here (she did the female lines on "Lady Rosenred"), creating a gothic The Mamas & The Papas type duet that helps drive it forward through its admittedly predictable and 'safe' structure.

"Sorcerers" is to follow, and to be honest, I just couldn't get into it. It sounds like a very poorly concealed hybrid of "Comfortably Numb" and "Ground Control to Major Tom". In fact, it's not really concealed at all, since one of the lyrics is: Now we're bound for ground patrol...and you get the feeling at any second that Waters & Gilmour are about to substitute in for Brennare and Tebler. "Can Die No More" has a very similar pattern to the first two proper tracks on the album, fairly catchy but underwhelming. "Nathalie and the Fireflies", on the other hand, is a damn good track, with a pumping, pop bass line and some nice frills of acoustic guitars that ring off into the atmosphere, giving you the impression an LSD-rainbow is reaching its arms over you. Tebler joins Brennare once more, and this is the catchiest 'gimmick' track on the album in the vein of "Lady Rosenred", but you do get the feeling this could have been an Eric Clapton song or something if you just through in a ripping blues lead.

"Let Us Go As They Go" sounds like a mix of "The Shadowshires" with an occasional plucky rhythm reminiscent of the great track "The Four Strings of Mourning" from A Crimson Cosmos, so a bit of a rehash with this one, though it's hardly bad. "Down the Nile" is actually pretty cool, but once again we have a little bit of an unveiled Pink Floyd ("The Nile Song"). But musically it's pretty creepy, as if Floyd suddenly took a turn for the dark and despair of slowly chugging gothic metal that opens into a simple but effective wash of chords, while the counter-vocal screams along to Brennare. Another pretty good song, after which a tranquil instrumental piece with some violin leads us out.

I've got to say, while The Neonai is not stunning and by no means great, it was at least a breath of relief that Lake of Tears were not going to stand about in the shitter with their pants down. Granted, I have unusual tastes when it comes to the field of avant-garde metal entities, but I was at least spinning this on and off for the better part of a summer, where with Forever Autumn I had to strain myself to ever enjoy a single lick. This is basically A Crimson Cosmos gone pop, with a few flawed tracks that sound redundant to either the band's own material or as thinly veiled tributes to some of their obvious influences. But when the band struck out on its own, legitimate, new journeys here, the smile widened and brought warmth to my sunny cheeks. A good album for an early autumn drive on a bright day, while your gal (or guy, hey...) kicks his feet up on the passengers' side dash.

Highlights: The Shadowshires, Leave a Room, Nathalie and the Fireflies,