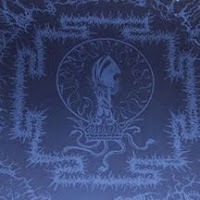 How many artists can you think of in the field of extreme metal that could survive the dissolution of not one, but two classic cult acts, then strike back a few years later with a project that is ultimately even more promising? If the Cloven Hooves at the Holocaust Dawn EP is any indicator, Pete Helmkamp now belongs in the closed company of the few who could succeed at just such a venture. The former bassist & frontman for extremist pioneers Order from Chaos and US atomic warfare gods Angelcorpse has returned with his new unit, every bit as focused and destructive as you could hope for, with the intention of taking absolutely no prisoners and kicking your goddamn jaw in.

Joining P. Helmkamp in this new declaration of conquest are B. Wolaniuk on guitar, and J. Read of Axis of Advance and Conqueror on drums. Read and Helmkamp have previously collaborated to create the Canadian lords of disgust Revenge, so their interaction here is only too natural, a bombastic violation of thundering distorted bass and turbulent kitwork that is layered appreciably in the scathing tones of Wolaniuk's six-string warmachine. Together the trio trample their way through four tracks in 18 minutes, each an intelligent yet barbaric manifestation of hybrid extreme metal that not only celebrates and refines the past work of Helmkamp, but sends a warning to the world: THE SLAUGHTER IS ON.

"The Abyssal Sanhedrin" opens in searing holocaust winds that have disguised themselves as guitar riffs, before the kick drums begin to take numbers and the rhythm lurches forward like a stilted titan carrying the weight of humanity's folly on his shoulders. By the 1:30 mark the band has decided enough is enough, time to blast off, and Helmkamp's ferocious vocals ensue, further insights into a man with a serious and unique education in the truth of nature and the crushing of weakness: a conqueror worm given post-simian flesh. "Aesoth Paradigm" churns the skin with a grinding savagery you will rarely even find in grind itself, and this song simply will NOT slow down for animal crossings except for a brief shift into grooving Hellhammer territory by the mid mark. "Disturb the Furthest Stars" is even better, with a simple yet sinister thunder to its intro rhythm that curbs the blasting force into ripping old school testicular death metal fortitude, and then chaos breathes into the composition through the jumbled yet beautifully violent verse riffing. "Swarm Intelligentsia" is the barbaric final round, desperate as it delivers each line of vocals through a nuclear payload of crashing, shifting blackened grind.

Yeah. Cloven Hooves at the Holocaust Dawn is simply one of the best short form indoctrinations I've heard in ages. These bastards should be hearing from a lot of personal injury attorneys in short order, as the material slowly circulates through the normal underground channels to those with their fingers on the pulse of what the future holds. And the future is grim. The future is Kerasphorus. The future is a field of ruptured skulls, a million bloodied hammers left by the wayside of the conqueror's path. Congratulations to Helmkamp and Nuclear War Now! Productions for destroying our lives once more, by the most awesome means available to them: the violence of intelligent, passionate expression.