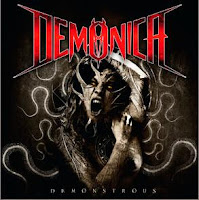 Hank Shermann of Mercyful Fate is no stranger to arranging and participating in a variety of side projects to his legendary alma mater, Force of Evil and Zozer Mez being just a few. Demonica is his latest ambition, a band he has put together with fellow Dane Klaus Hyr on vocals. Oddly enough, a trio of US thrash veterans are present to round out the lineup: Craig Locicero and Mark Hernandez of Bay Area stalwarts Forbidden providing guitar and drums, and Mark Grabowski of the lesser known Colorado band Corruption on the bass. The result is a sound that, you guessed it, centers itself around a thrashing instinct, with massive guitars and simpler, accessible songwriting that focuses on the very loud and frontal vocals of Hyr, who can alter himself from a Slayer or Metallica-like aggression to a rarer, more soothing side. If you're expecting a modern Mercyful Fate 2.0, I'm afraid to inform you that there is very little of that here...perhaps a sliver in some of the songs, due to Shermann's riffing style, but nothing quite so shrill or melodic.

Armed with what must be closing on 100 years of metal experience, Demonica has composed and delivered the 10 tracks, 48 minutes of their debut, which is sadly titled Demonstrous. It's a corny title, but it does sort of represent the band's passion for loud and wild, hammering thrash/power metal rhythms glazed in brief, ripping leads. This is one of those 'wild child' sort of bands, like a mid point between old Metal Church and Metallica's debut, only not as catchy. The riffs all rock, and rock hard, like a biker gang armed to the teeth crossing a post-apocalyptic wasteland while being stalked by demons. But the songs really didn't stick with me, and while Klaus Hyr's vocals are loud here to compensate with the very bold guitar tone, I think he goes a little overboard, sort of like Tim 'Ripper' Owens when he's doing his lower registers...it looks great on paper, but there is something intangible missing here. Perhap he is just trying to hard, or it's the way the lyrics, which are often extremely cheesy, and not always in the good way, seem like a string of cliches that serve only to make the seasoned listener wince.

Of course, if you're into this sort of approach to metal music, grab a beer and go wild, because the band has all the technical stuff down pat. They're hardly complex, dishing out a lot of riffs that would be childsplay for Shermann even 20 years ago, but if you simply want to bang your head and ask for nothing more, they suffice. Particular songs on this album made me cring more than others: during "Luscious Damned", I was half expecting the Beastie Boys or Kid Rock to show up and start rapping, or Zakk Wylde to bust out a solo...it's just one of those extremely simple rhythms that plod along in the spirit of rock and roll. I don't really enjoy Tyr's howling over the rolling chugs of "Fast and Furious", but there are some cool, Fate-like melodies that occasionally erupt into the mix, and when the song does in fact get fast, it kicks a little ass. "Palace of Class" has a long, mellowed out groove-nu metal sequence that I wasn't feeling, and "Summoned" has a basic Shermann rhythm gone crushing to the point where it feels like a big mosh pit mega-stomp.

However, Demonstrous is not all doom and condemnation, for when it excels, it does in fact excel. "Astronomica" is a pretty sweet instrumental that closes out the album with some huge riffing and then a final, wonderous solo section. "Demon Class" opens with a lot of force and features a quality lead within. "Alien Six" sounds like a cruder, meaner adaptation of modern Slayer, and "Below Zero" is also pretty kickass, a track in which I almost found myself caught up in the hysteria of Hyr's barbaric vocal gluttony. The atmospheric guitars that ring out all doom-like near the close of the song are pretty sweet.

Demonica certainly have the building blocks to rival any supergroup, as most of these guys have been part of something huge in the past. The mix is enough to impress you through any speaker system, the solos and rhythms all cut and crush, and one cannot accuse Klaus Hyr of not at least sounding like a bonafide powerhouse of a man, even when it feels even louder and more over the top than a Chuck Billy. Demonstrous is neither a weak nor bad debut effort, and it sounds like the guys are taking care of business while enjoying themselves, but I didn't find that all the pieces here could add up to a complete, memorable listening experience.