Sorizon - Behind the Emerald Starscape (2010) 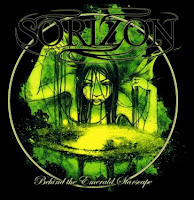 Considering that the Orange County area of California is a hotbed for awful pop punk and suburban trash rap like the Kottonmouth Kings, a band like Sorizon must be a huge relief for any sane person living there, because they've basically absorbed all the vacuum of sanity and intelligence left behind by so much of that music scene and injected into their own work. That they can write and deliver a 43 minute debut full-length album of such professional traits and well-crafted melodic metal as this must earn them some measure of castigation in such circles, but for the rest of us, Sorizon is an exciting young force within the often ignored spectrum where progressive and traditional metal elements gather for a tete-a-tete.

However, while I would be equally comfortable classifying the band in either the US power or progressive fields, there is actually more to this entity, for they incorporate a host of other influences, the primary of which would be 90s melodic death metal akin to earlier In Flames or Dark Tranquillity. For the most part, they pull it off. The band cites a wide array of influences from Symphony X and Dragonland to Arch Enemy and Norther, but I feel like the band most closely resembles the Italian band Eldritch during their earlier (and good) years. Melodic, loaded with hooks, and a vocalist who makes the most of his down to earth, middle range. Keith McIntosh actually goes beyond this, in fact, because he's also adequate at harmonizing himself, or snarling and growling for the more extreme parts.

Normally this mixture of clean and harsh can prove a jarring proposition, as with a band like Into Eternity, where you get the feeling the band is trying to please everyone and ending up a muddled mess, but at the very least McIntosh does a good job within the distinctive styles. The harsh vocals do feel like somewhat of a distraction on this album, and I don't often find their presence necessary, but he manages them with a restraint that suppressed any gag reflex I might have had. They're not as forced sounding as many of the modern US melodeath/metalcore bands who insist on overbearing them, but they're also not omnipresent on this album. This band knows where its strengths and loyalties lie, and they can be forgiven for a little experimentation.

One thing is certain, he's met his match with this band. Sorizon features a pair of guitar players (Danny Mann and Al Jorion) versed in exactly what makes a song keep the attention, offering a plethora of balanced aggression, melody and lead work that never once sullies itself in needless repetition or hokey self-indulgent shred. The rhythm section of Sean Elston (drums) and Keith Hoffman (bass) is fit for the task, grounding the guitars which are heavy but lack excessive crunch. I do feel the bass could get a bit more adventurous in a few of the sections, but you can really hear him on the cleaner parts and his tone is the right counterbalance for these guitars. The production of Behind the Emerald Starscape is highly professional, the measure of many peers within the genre, with the band having the actual foresight to send it over to Finnvox Studios for mastering.

There are 11 tracks here, two of which are instrumental, and I actually found myself gravitating more towards the later half of the album since there are some stunners there. "Bridges Burned" is a mature piece which opens with a mere plodding bass and clean guitar, then blossoming into an arch of melody accompanied subtly by McIntosh, before he explodes into the verse with a latticework of memorable vocals, like a deeper Ray Alder. "La Fee Verte" is a healthy draught of absinthe given musical voice as a progressive labyrinth of heavy grooves and thirst quenching solos, which also seems to have inspired the album's cover art. "Outreach" is considerably complex for such an accessible track, with excellent vocal harmonies. But there are also some excellent songs early on, like the engrossing "Lady of the Sea", the graceful "Don't Just Exist" (which includes a rare synth line, the band is largely guitar-driven), the quirky instrumental "Kirsnabogg" or the wild western saloon surf that opens the gothic prog metal of "Beauty in Darkness". The only song here I couldn't embrace was the opener "Cosmic Eden". The music is fantastic, as are the clean, harmonized vocals, but it's probably the most excessive as far as the Night in Gales-like melodeath snarls which felt a little overboard and unnecessary.

But really, if a few vocal lines are all I can complain about here, Sorizon is off to an impressive start. Most bands don't have their shit organized after a decade or so, but in two short years these Californians have mustered a great debut that nearly rivals the better work of Kamelot or Symphony X? There's no real chink in the armor here now, so I can only imagine what the band might come up with if given a few more years of gestation. Without being intensely poetic, the lyrics of Sorizon manage to stir up an enthusiasm for both the future and the mysteries of the world's past. They're a band of dreamers, and when you listen closely to the music they create together, the dreams are already well within reach of their galaxy-wide grasp.