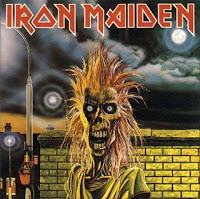 First impressions are important, and I can only imagine how much they accomplished for Iron Maiden when they released their 1980, self-titled debut, the first mile marker on a long, fast paced marathon straight to the very summit of metal music and worldwide notoriety. This was unfortunately not my own first exposure to the band, as I hitched a ride on the wagon with Killers and then had to listen back. I don't enjoy it quite so much as its successor, since that album simply kicked my ass a lot harder in the long run, but there are a number of tracks here which are nearly impossible to shake out of the memory. At the very least, the firm roots were planted which would blossom into the steel fruits of the next three decades, and beyond...

Iron Maiden is notable as the only album in which the original lineup is over 50% different than the current roster, and to think...the band had a fair number of vocalists, guitarists and drummers before this one even took shape. Paul Di'anno and Clive Burr would go on to the sophomore album Killers, and Burr to The Number of the Beast, but this is the only studio album to feature Dennis Stratton on guitar alongside Dave Murray and Steve Harris (the two remaining 'original' members today). This is also perhaps the album which most matches the 'NWOBHM' motif that many of the band's peers were exploring, a very 70s vibe which comes as no surprise since some of the songs were written in that timeframe. It's not entirely heavy (none of their albums are), and several tracks maintain a somewhat psychedelic vibe, but that's actually one of the things I enjoy most about the album.

"Prowler" is the first at bat, a steady rocker that belongs at the heart of any Western 80s metropolis, as the ladies of the night and their admirers stalk the seedy city streets and the hard bite of the chords shuffles on, erupted by the forceful melodies that pick up the pace. Perhaps the best part of the song is the wild bridge at 1:47, where the guitars burn off like a brand against the mind and the solo explodes like a supernova. "Remember Tomorrow" feels like the Iron Maiden answer to "White Rabbit", with a psychedelic slur to the bass and a gently bouncing rhythm that bristles at the edges with its slight guitar shudders, only to transform at the 2:00 mark into a powerful stretch of chords that mirror other NWOBHM bands like Angel Witch. When all and said is done, this is one of my favorite tracks on the album, memorable and covering a wide spread of emotional impact. But "Running Free" is one of the most recognizable, due to the steady splash of the drums and the wonderfully delivered chorus line. There's a reason this song has been a live standard ever since...it's the type of sentiment that can seek out relation far wider than the band's core metalhead, hard rocker fanbase.

"Phantom of the Opera" is the 'epic' of this debut album, at about 7 minutes long, so not quite as involved as some of their sprawling, later tracks. It's tightly controlled, with mesmerizing, spry, memorable acrobatics on the guitars and a fantastic bridge laden in even further melodic musings, before returning to its savage final verse. The instrumental "Transilvania" features some killer speed metal before the drum beat enters to marry the slower, thundering pace of the pre-verse, which feels half like a pirate shanty. Another of the timeless classics of this album, it features the most intense guitar exchanges and Steve Harris losing his mind on tape. "Strange World" is by far the most psychedelically charged song in the Iron Maiden discography, like the band were jamming to some lost Pink Floyd cycle but incorporating the shimmering melodies of the metal guitars.

I'll admit I'm not the biggest fan of "Charlotte the Harlot", it's not that the ballsy blues metal atmosphere bothers me, simply that the riffs do very little for me. But regardless, it's got some intensive drumming and a shuffle to it that feels similar to several of the tracks the band would later release on Killers. The band's namesake "Iron Maiden" stands alongside "Running Free" as one of the tracks here that the band will simply not forsake, having played it in their regular live set for 30 years. It's not my personal favorite, but certainly infectious, with fun little melodies that launch out of the chorus and delightful bridge melodies. I should also mention "Sanctuary", which may not have been included on the original release of the album, but has been a part of so many subsequent re-issues that it deserves a spot here, a fun and firm fusion of Maiden heresy and Steppenwolf's "Born to Be Wild" with some wailing solos and busy bass.

Clearly the start of something beautiful, much of Iron Maiden holds up well to this day, though not so much as the crushing followup Killers. There are fans out there who still rank this as the band's finest hour. But, the rose-tinted goggles of nostalgia aside, it does not fully represent to me the characteristics of the band's best work, which would arrive in spades over the next 5 full-length efforts. I don't often find myself going out for a "Charlotte the Harlot" or "Sanctuary", and though "Strange World" is peachy, it feels to me like some other band. Still, the performance of the original members Stratton and Burr is strong here, and Di'anno's tones sound natural with the more 70s hard rock and psychedelic foundation that permeates about half the album. It's an important album, and a very good album, critical in helping to usher on the onslaught of 80s metal evolution and its many hydra-headed revolutions and sub-genres, but I honestly feel the band has surpassed this many times over.