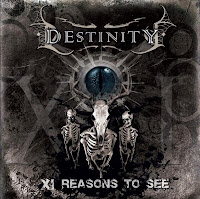 It's difficult to believe that French Destinity are already on their 7th album, making them one of that country's most veteran bands within the modern metal sect. But having signed a deal with Lifeforce records, a prominent vehicle for metalcore and melodeath acts out of Europe and the US, they offer their latest take on extreme metal, XI Reasons to See. Like some of the band's more recent fare, this is a little hard to pinpoint, a mesh of death and thrash metal which sounds massive due to the band's high production standards. They've pretty much abandoned the symphonic, melodic black metal of their roots by this point, though you can still hear it in the occasional, atmospheric overtones.

No, the sounds erupting from XI Reasons to See feel more like a sampling of Strapping Young Lad, Samael, Hypocrisy, The Haunted, Darkane, Dimmu Borgir, Soilwork, Mnemic, Gojira, Vader, and At the Gates. All rolled up into a single band, with state of the art, edge of your seat crushing tones which will firmly date the album as a product of the 20-teens, or whatever we call this decade when it's finally over. As sad as it seems, despite the band's obvious studio capability and diverse approach to songwriting, XI Reasons to See is 52 minutes of simply average metal that only rarely brings its best to the table. It's sleek, it's current, and it's devastating as far as the level of aggression, but not once through its playtime was I able to make a mental note of any individual track or riffing segment that I'd want to return to. In fact, after a few spins, it just became a tedious exercise in how to sound, not how to write.

It hits from too many angles. You've got your barking, multi-layered grunts, and clean, also layered vocals that sound like a hybrid of Darkane and Gojira. You've got both death and thrash metal rhythms, in addition to more mathematical grooves and a fuck ton of baseline chugging. You've got competent leadwork, keyboards, and symphonic elements, as well as a drummer who seems capable of anything the band throws his direction. There's just nothing compelling about the way the puzzle pieces all fit together. Whether the band is performing in the slower, darker thrust of "Rule of the Rope"; the symphonically attuned, forceful thrasher "A Dead Silence", or the mellower, heavily vocalized, synth-scapes of "To Touch the Ground", it feels like so much processed material that will appeal only to the novel young metal fan who has no history with any of the consituent sounds that barely complement one another.

I hate saying that an album has no 'soul', but it's really the case for XI Reasons to See. There is no question of Destinity's competence, but they've seen better days on Supreme Domination's Art and In Excelsis Dementia, back when they evoked a separate sort of facelessness. Probably the best riff on the album is that which intros "Your Demonic Defense", but even this is just a rather average melodeath rhythm. At the same time, there is nothing particularly bad or offensive about it either. It's not like the band breaks out into much in the way of awful metalcore vocals, gothic fairy vocal accompaniment or completely monotonous breakdowns. So we'll just call it a draw here and walk our separate paths.