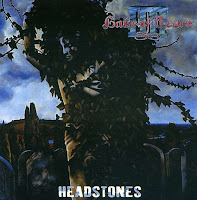 Coming just a year after the debut A Greater Art, Lake of Tears took very little time in refining themselves, and the follow-up Headstones is an improvement in every department. The songs flow far better here. The atmosphere is enormously powerful, through both the crushing guitar tone and the synth/folk elements that dwell within. The vocals are a step up without losing any of their gruff, smoky edge. The lyrics and titles are a little more interesting. And most importantly, there are songs here that would be bonafide hits if doom metal were more of mainstream, accessible genre (at the very least "Sweetwater" could have seen huge success). About the only thing holding this album back from perfection would be the 13+ minute sequel to "Upon the Highest Mountain", called "Path of the Gods", which occasionally steers into boredom country.

The band is back with the same core lineup but a new producer, Ulf Petterson, who also contributes the keyboards in the Lake of Tears tradition. It's hard to imagine Skogsberg getting owned in any situation, but this album sounds so much better than its predecessor, bright as a moon but as dark as the shadow of a dragonflight. The band also makes use of a few guest musicians, including a guest guitarist Mikael Hult who performed the acoustics on the title track, and a female vocal (which appears only briefly). The lyrics swerve deeper into realms of fantasy, but maintain their rustic majesty and poetic power (though somewhat corny in spots).

When "A Foreign Road" crashes forward with its massive 'get high' guitars, you might get the impression that the band has gone all out towards the stoner rock genre, but this impression is soon rectified by the forward pulse of the verse and the writhing lead guitars that hang at the edge of suspension. The chorus here is immense, with a Judas Priest-like melody strung through the guitars that matches perfectly to Brennare's killer chorus. "Raven Land" begins with a dark acoustic guitar over some scintillating background synths, flutes and a cleaner yet still powerful vocal line. The lyrics and vocals to this song actually come off quite silly, but endearing all the same, and when it picks up to the heavier chorus/verse around 1:30 you are suddenly thrust into this lush, beautiful dreamscape that transcends the natural. "Dreamdemons" cruises along with a confident, heavy as fuck rhythm that spews fluttering melodic leads and an amazing chorus. The track enters a more gothic spectrum during the bridge, where the axes chug slowly alongside higher pitched organs and 'romantic' spoken word vocals.

But then comes "Sweetwater", a song so fucking catchy that it puts Corrosion of Conformity's "Albatross" to shame. Why was this song not suddenly cast as the Swedish national anthem? Big, four chord crunch hooks over the chorus, flowing, tear-swelling clean guitars for the verses, and the transitions between them give you more than ample warning to sing along:

Even the lead in this song, loose as it feels, is quite memorable as it rotates back towards the verse. The song is so good that the album itself has to take a smoke break afterwards, giving us the deeply warped, gothic synth segue "Life's But a Dream" while it hangs out in the cold, exclaiming to passersby 'Yeah, I just did that.' But "Sweetwater" is not the only 'hit' here, as we are introduced to the beautiful acoustic power of "Headstones", the perfect song for a riverside graveyard, church bells ringing off in the distance of its intro, and an amazingly catchy chorus that should at least make you cry if not hang yourself immediately from the nearest tree.

"Twilight" brings us back the doom, but its glazed in these excellent backing synths and a clean, plucky melodic guitar line that gives the overwhelming feeling that "Sweetwater" carried you to the afterlife, "Headstones" gave you an image of your surviving loved ones gathered about your tomb, and now this song takes you into the unknown of the Eternal Night, as warm and inviting as it is sad. The little guitar melodies continue to erupt through the track as if we were listening to the Moody Blues or Roy Orbison jamming alongside Tony Iommi. As if the album wasn't already enough to imprint itself deep inside my memory for ages, "Burn Fire Burn" is a heavily thrusting song that pays tribute to the D&D campaign and novel setting Forgotten Realms, and it fucking CRUISES along, like wings of dragons in the jetstream as they slowly soar towards the manifestation of their destiny as the scourge of all man, elf, and dwarf. Only a girl could not like this song, and I'm willing to bet even some of them are man enough!

That said, the closing, drawn out epic "Path of the Gods (Upon the Highest Mountain, Part 2)" is the one track here I cannot fully praise. There are certainly worthwhile sections of the track, including the opening, goofy narrative above the flute and clean guitars, which slowly gathers grace like moss to a mountainside stone in autumn. The slow, chugging rhythm of the regular verse is also quite powerful, and you can imagine if the song had been written by Quorthon and placed on one of his later albums. This is also where the female vocals arrive, but only as a complement to Brennare during the late verse. The song gets pretty intense near the close, when the synths swell over the gorgeous chugging, but the middle of the track and the ambiance of the end might have been overdoing it.

Headstones is simply a beast, which redefined the potential of both doom and gothic metal through its rustic, natural highs and powerful flights of fantasy. There were not a lot of bands to this point which could touch upon this scenery, despite Sweden being a hotbed of doom with Candlemass and the similar Memory Garden. No, what Daniel Brennare, Jonas Eriksson, Mikael Larsson and Johan Oudhuis concocted here was something special: inviting, unique, and ultimately refreshing. Even Lake of Tears has not put out another album like this since. They've done one or two better on themselves, granted, in the masterpiece A Crimson Cosmos and the more recent return to form Moon and Mushrooms. But the folksy purity of Headstones is something I would not mind revisited, whether it were by the Swedes themselves or some other gaggle of dreamers.