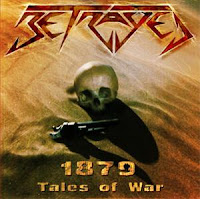 Brazil might have had the winning hand when it came to the 80s thrash explosion in South America, what with its colossal leader in Sepultura and the likes of Chakal, Vulcano, Mutilator, Dorsal Atlantica and many more. But I'd have to award a solid silver medal to Chile, who came a little later to the game with a solid roster including Necrosis, Torturer, and a little known band called Betrayed. They did not release a lot of material, just a demo and this sole album 1879 Tales of War, but already the band showed a sense of refinement, with conceptual lyrics focusing on the War of the Pacific and a nearly endless onslaught of decent quality riffs that still maintain a rugged energy when listening 20 years after the fact.

The biggest influences I hear within Betrayed are American bands like Anthrax, Exodus, Death Angel, Forbidden, and Slayer, delivered through crisp licks that often become a little more forceful or melodic than one might expect from the majority of the writing on this album. The one arguable weak link in this chain is vocalist Blas Mateluna, whose delivery and accent come across as rather lax, if not outright sedate. But listen long enough and he somehow magically transforms into a piece of the puzzle, and adds an element of distinction to the sound, though you'll never be dialing up this album if you seek an impressive frontman. Otherwise, 1879 Tales of War is some tight, engaging thrash metal with a good sense for dynamics and good guitar tones that maintain their fortitude.

Not every track strikes gold, but the band works best when they actually use the neuroses of Mateluna's vocal chords to create a sort of morbid, percussive dialect, as in the opening call to war "Fight for Your Land", a bevy of hammering riffs and some wild, Bay Area leads that blast through the battlefield before you can bite the pin off your grenade. "The Real Me" opens with a burst of melody across some epic, shifting rhythm work that cedes for arpeggios before the violence of the verse begins. Other ragers include "Betrayed", "Love and Pain", and "The First Desillution", with its extensive mosh stomp intro that mirrors the work of Anthrax or S.O.D. On the other hand, I got lost in the instrumental "Human Madness" or the slow to function title track "1879", and even at their prime, Betrayed were not quite playing at the level of the rest of a world that was producing work like By Inheritance, Coma of Souls and Rust in Peace.

Still, it's refreshing to hear that such sounds were spread wide to countries we weren't used to hearing from in the 80s, and Betrayed are rather intelligent to boot, using their songs to tell a historical saga rather than the petty variety of topics typical to every other album of the day. This is rather forward thinking in my opinion. I mean, just how many war themed metal bands do we have around today? Hail of Bullets? Loits? Hundreds of them. Betrayed was already there, and though 1978 Tales of War is not exactly a standout piece of metal history, it's both adequate and competent for any archaeological thrasher digging through the more obscure species of South America. And, would you know it, the band is around again today!

Highlights: The First Desillution, The Real Me, Love and Pain