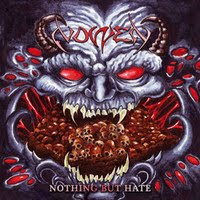 Nowen are a Finnish four-piece performing a hybrid of thrash and death metal that you simply don't hear so often these days, with a very boxy low end tone to the guitars, often thrusting forward with great momentum, and a sense for the melody that we're accustomed to through a lot of the late 90s, 00s Scandinavian death metal. Nothing But Hate is their debut, though they put out an EP five years ago known as Where Hell Begins. Some of the songs here are quite good, but there are others that I couldn't build much of an attraction for, as they lacked some of the same tightly wound riffing.

The intro is a battering death metal piece with some nice, brooding chord breaks and brief flashes of leadwork, while the first proper track with vocals is "The Sick Weakness", a forward thrusting melodic track with some rather forgettable hooks. The riff in "Dead Meat" reminds me a hell of a lot of "Land of Tears" by Pestilence, the short and muffled notes have that same feeling, but as I absolutely loved that song, this doesn't rub me the wrong way. There are also some fine, expressive chords that drift through the bridge which add a layer of melody without any cheapness. "Fragile" is a high paced melodic thrasher once its opening cleans depart, with a style somewhere between Master of Puppets and Artillery's earlier years. Of the remainder of Nothing But Hate, I'd have to say I enjoyed the pumping "Bleed, Suffer and Die" or the more melodic bend on Slayer-like abandon in "After the Suicide". The leads in "From Time to Eternity" are also decent.

This album is not necessarily anything to rush out and grab, or write home about, but there's a vibrant flair to the writing which can serve in short bursts, and the band manages to process a wide array of influences without sounding exactly like any one (certain riffs excepted). There are 4-5 tracks here which are genuinely notable, fast excursions into excitement, but I found myself willing to skip the rest. Still, it's a solid enough footing that, if expanded upon with slightly better melodies, more interesting leads on the whole, and perhaps more entertaining, powerful vocals than the gruff standards of Nothing But Hate, could develop into one of the stronger Finnish thrash acts we've had in some time.

Highlights: Dead Meat, Bleed, Suffer and Die, After the Suicide