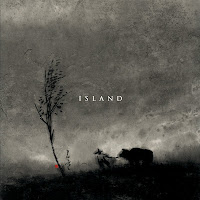 Island is the product of most of the members of German progressive death metal outfit Valborg. But if you've not heard that band, perhaps you are aware of multi-instrumentalist Florian Toyka's other band, the excellent Klabautamann. Island is a study of a more progressive rock nature than the members' other work, but there is certainly an overlap that fans would appreciate. And it's not as if this project just sprung up due to the increasing popularity of a Klabautamann: Island has been releasing EPs and a series of 'Christmas' singles since 2003. The s/t full-length debut Island is a mellowing affair, but give yourself in to its 56 minutes of tranquil, often sombering bliss and you'll come out the winner, for it shows all the strength of songcraft that other proggish rock/metal moguls Opeth and Porcupine exhibit, if not more.

Much of the material on this debut is delivered through glowing clean guitars, flowing percussion and the use of both brass and contrabass to contribute a rustic, miasma. I've been trying to reach back into my (admittedly) narrow memories of 70s-80s folk/prog to find apt comparisons, but I can't quite put my thumb on anything, so let's say they establish a median between Pink Floyd and the 'clean' Opeth, while putting the 'rock' back in krautrock, and leave it comfortably numb. The compositions mirror a lot of what I like about Klabautamann or Valborg, actually: an impressive array of melody that is slightly complex due to the length of the average track (Island has 5 songs over 8 minutes, one of which is almost 11).

Speaking of that longest track, it is placed straight in the front of the line. "Jukai" is a wonderfully adventurous passage along vistas of slow desperation and staggering calm, occasionally cut through by the swell of brass or a moodier twist to the vocals. Lyrically, the band fleshes out the academia of nature, transforming their environments into a poetry of sensation. It's quite relaxing to read through their words while you listen to the rambling, if somewhat sullen bliss. The opening segment to "Waterside" sounds like something that might invoke if Voivod were to jam out a clean set with just a hint of woven, distorted lattice beneath. The song picks up with a few more crisp 'metal' lines in the later moments, kind of similar to the latest Enslaved with the added dimension of the horn, and a gorgeous, dulled glimmer to the vocals. "Nadir" evokes a measure of doom, and the brief "Mistral" (hovering just over 4 minutes) returns to calm, before the epoch of "Origin", which contains the heaviest section of the album after around 6:00. I did feel as if I were about to check out during moments of "Harbour" and "Sol", but approaching the album later and using a reverse track order I found them a little better, in particular the closing, low synth of "Sol" which I almost wish had a greater presence on the record.

Island is for the most part a triumph, but it's a carefully paced work which certainly would benefit from the proper listening atmosphere. Cuddle up with a tea and novel. Or just your girlfriend. Or your boyfriend. When motionless, the album provides inertia, sapping itself about your spine and traveling upwards towards your brain like a warm wind coming off the waterfront at an abandoned beach. It's a hipster's paradise, but not without good reason, for the music is glistening with the dewdrops of a thousand sorrows. Who said poetry is dead? Clearly it has evolved directly into the musical phrasings of Island.