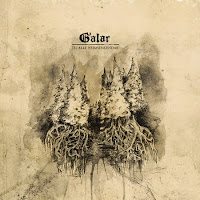 It's hard not to think of Viking metal as being beaten to a pulp these past two decades, what with a great many subpar acts springing up in the genre and diluting its novelty. I'm sure many have the purest of intentions, and should in no way be faulted for celebrating the subject (especially if its a point of their personal ancestry), but tossing in a few folk instruments and playing forgettable, mead drunken melodies to offset a few substandard black metal charging rhythms is simply not going to cut it. What does this have to do with Norway's Galar? Well, they are one of the few acts to happen along, and not only cut it, but cut the entire forest down to its roots with a sharply hewn axe. Til Alle Heimsens Endar is the band's sophomore album, following up solid debut Skogsvad from 2006, and the band manages to sum up exactly what's been so great about their forebears like Enslaved, Týr, early Borknagar, and Viking-era Bathory without crossing streams too closely with any of them.

How Galar manage to manifest themselves is through a high end, crisp production and a mixture of haunting, traditional clean vocals ala Heri Joensen or I.C.S. Vortex, a more savage snarl which recalls Quorthon, and a slew of bottom heavy churning riffs of black and death metal accompanied by oft thrilling, hammering melodies. This band knows how to craft a sorrow-stuffed guitar line that can dominate the fast and thundering drums of session member Phobos (also of Aeternus). But where they really excel is in the layering of the vocals; often Fornjot will multi-layer himself and then have Slagmark's vocals also crashing through. And yes, these are the same two gentlemen who play the rest of the instruments. It's normally a two-man show, and that serves to make Til Alle Heimsens Endar all the more impressive.

The classical piece "Forspill" that opens the album is beautiful, a valley of strings and bassoon and a stark, dreary piano that slowly drops us into the embrace of the underworld, the dark corners and caverns from which the elder evils plot and stir. Before very long, an air of desperate melody arrives that soon transforms into the central, thrusting guitar rhythm of "Van", which burns above the blast beat like a funeral pyre upon the river as new battle is beset upon the shores, new blood is spilled into the life giving and taking water. The vocals truly soar throughout the piece, and the band seems to have no end to their stream of elegaic melody, even as the next track, "Paa Frossen Mark" arrives bearing a more swerved, groovy course. "Grámr" is the album's longest piece, breaking for an extended acoustic segment before the charges at the rear of the track crush you beneath a wall of spears. The title track itself is one of the more relentless assaults upon the senses, but even here there are scads of vibrant melodic tones that wash themselves across your skin like desperate, cold rains. There are also two other classical/folk instrumental pieces here which showcase the band's skill outside the core metal instrumentation: "Det Graa Riket" and "Etterspill", both of which are beyond competent and rather thrilling.

Galar feel like a band far beyond their years in compositional maturity, and Til Alle Heimsens Endar is a bright improvement upon its predecessor. If you're a fan of accessible Viking/black that does not entirely ignore its vicious roots, or even a fan of symphonic work entwined with metal, I don't think you'll want to be missing it. There is no eye-rolling, mug-swilling LARP soundtrack to be found here...just a focused, professional, effort that puts many of the band's peers to shame. Exceptional, and highly recommended to fans of Enslaved, Einherjer, Týr, Borknagar, Vintersorg and perhaps even Klabautamann.

Highlights: Paa Frossen Mark, Til Alle Heimsens Endar, and all of the instrumental pieces.

You had me at Aeturnus.