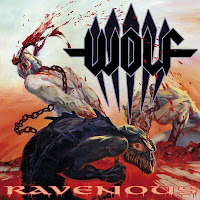 It seems like only yesterday that I first heard Wolf's explosive revival of pure 80s heavy/speed metal motif, anchored by Niklas Stålvind's high pitched, memorable vocal lines. The truth is they've been around for quite some time, well over a decade, and Ravenous is their 5th full-length. It is their most settled and mature sounding album to date, and a good one, but in places the lyrics felt a little too cheesy even for Wolf.

Many of the songs here seem focused on horror and legend: vampires, witches, psychopaths, etc. "Speed On" rocks forth with some well composed melodic guitar lines, and a fairly obvious chorus, but catchy nonetheless. "Curse You Salem" relates the tale of a witch hunt, and it's one of the better tracks on the album with some great riffs. "Voodoo" is very, very old school heavy metal style, though Stålvind's vocals take it over the top. Here is where you'll start to notice some of the really bad lyrics bleed in: when you put your hex, to get rid of your ex. Really? "Hail Caesar" is a cool track that reminds me of early Hexx with its rhythm. "Ravenous" is another riff monster, and Stålvind does a nice Dickinson-style vocal line in the verse. "Mr. Twisted" has riffs aplenty but the vocals and especially the lyrics suck:

"Love at First Bite" is a vampire sex song which is just fucking hilarious lyrically in the way so many of those 80s songs were:

My tongue is licking, is licking your wicked body
Your writhing and moaning, but you don't want to stop me.

I rather enjoyed "Secrets We Keep" despite another almost painful lyrical streak. As for "Whiskey Psycho Hellions", what do you really expect? Fortunately the music again almost makes up for the embarrassing words. The final two tracks "Hiding in Shadows" and "Blood Angel" are both really good and the lyrics aren't quite as bad. The latter has some really nice acoustic guitars in it.

It's not that I expect Wolf to produce the work of a poet laureate, I actually expect a little cheese from any power metal album, but there are a few places where the lyrics just stick out like a sore thumb. Otherwise, Ravenous is a great album. The songs are well-written musically and Niklas' voice is gorgeous and in top form. As a whole, the album isn't as catchy as Evil Star or The Black Flame, but it will should still see some reasonable time in my car stereo.