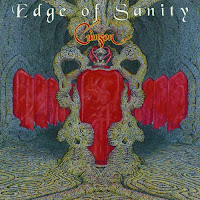 It was neither the first or last time a metal band had created the long-playing, single track epic. Considering Dan Swanö's deep roots in the progressive rock field, it was inevitable for Edge of Sanity, and it's got to be one of the first death metal albums of its type (highly melodic Swedish death metal though). For the most part, it succeeds.

Coming off a streak of great albums like Unorthodox, The Spectral Sorrows and Purgatory Afterglow is no easy feat, and I did feel this album was a little weaker. "Crimson" is a 40 minute long affair which tells the story of a tragic future in which humanity has lost its ability to reproduce, until one day a new child is mysteriously born. But is this child a gift from God or the infernal? It's an interesting enough concept, and lyrically the album gets pretty dark.

She drinks the life-blood from the feebled man.
Empty bodies, soul-drained by the virgin queen.
Finally given the pleasure to die.
She aligns the hate inside their hearts.
Her chosen knights will make sure all life departs.

Now, Edge of Sanity is a good band, and they definitely have a dozen or so riffs on this album worth hearing. Any fan of Purgatory Afterglow or the later Infernal will probably enjoy the material here. In addition, there are some guest spots from Opeth's Mikael Akerfeldt, and the long nature of the work may appeal to fans of that band. The sequel to this was released in 2003, and while it was a little better, neither of the Crimson albums are among the best of Edge of Sanity material.