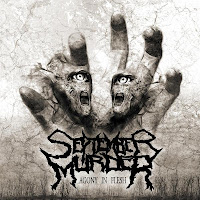 Germany's death metal scene has been nearly as explosive as its black metal scene in recent years, with a steady mix of 'come of age' veterans and new artists releasing decent albums. This is the first full-length from September Murder, an energetic display of fist in the face death metal, busy without overwhelming technicality and often melodic without escaping entirely into the melodeath genre.

Agony in Flesh crushes across eight tracks of grooving, winding death charged up on a thrash battery. "...and the Entrails Fill the Sea" opens with a moody, slower riff which paints a desolate image of this band's urban wasteland of gutter stomping death. "Slavery of Heartdisruption" has some slightly Swedish influence to its agonizing rhythm picking. "Breathing Cadaver" begins right where the previous track leaves off, though with a battering drum rhythm and flustery, thrashing guitar line. "After Every Setting Sun" rages with some roiling war drums under a few brutal sludging chords, before another up-tempo melodic death/thrash interplay for the verse. "Between Grass and Guilt" is one of my choice tracks on the album, a good mix of the band's choppy riff delivery and brutal tone. "To Satisfy the Eyes of an Obsessed" has a great flow through its opening segments, and "Again, It Crossed My Way" is simply brutal. The album ends with the title track, another balanced attack with a good melodic verse riff.

There is a chunky and dark, dominating tone to this album which really summons out its strengths. Urban and intense, this is the type of death metal which screams at you of domestic abuse from an apartment building in the projects. It's social as opposed to just being centered on guts and gore. Frankly, we need more death metal like this, and September Murder sacrifices nothing in terms of brutality to deliver its message. A good start for this band!