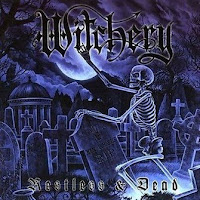 When Witchery first arrived on the scene, formed from the 'ashes' of Seance and Satanic Slaughter, I was truly blown away, for their debut Restless & Dead marks one of the very best of the retro thrash metal efforts. It is exciting, entirely memorable and delivers a finely honed blackened edge to its thrash/speed/heavy metal influences, in particular the German sect of cult thrash gods such as Sodom and Destruction. It's a phenomenal album which has rarely been equaled or surpassed, not even by its own follow-ups which have gotten progressively weaker in each iteration. It's also a lot better than any of the works from its members' previous bands (as well as Patrik Jensen's other riff vehicle The Haunted).

But let's stick with Restless & Dead, shall we? "The Reaper" doesn't simply burst out of the starting gates, it pulls down the entire stadium as it fires up. This is quite possibly one of the best first tracks on any metal album, ever. It thrusts along with a furious thrashing pace, Toxine's vocals dripping their pure venom across some pretty kickass lyrics. Yeah, you might think snarls of 'the reaper reaper reaper comin' to get ya!' are pretty hack, but in the context of this song they are maddeningly awesome. The riffs are some of Jensen's best written, in particular the great bridge before the final chorus of the song. Sparse and filthy leads also adorn this gem. Challenge to all 'retro' thrash/speed metal bands: let's hear you write a song like this!

"The Reaper" would be enough to satisfy any non-poseur in the universe, but fortunately Witchery saw fit to hook us up with the rest of the album too. The band's namesake "Witchery" has a killer, caustic groove hook which alternates into brutal classic speed metal verse and an intense volley of chords for its brief choral bridge. "Midnight at the Graveyard" begins with nice samples of rain and a tolling bell as it fuels up its incredible thrashing might. "The Hangman" is a slower tune with some excellent Mercyful Fate influence (a band bassist Sharlee D'Angelo has also played in). "Awaiting the Exorcist" is an glorious, driving track with some killer vocals and burning leads. Insanely riffy. So you've already got an incredibly worthwhile album and you're only halfway through. The rest is pure thrash poetry. "House of Raining Blood" is a slower, moodier track with a creepy old school horror theme. "Born in the Night" lets the cut of its bladed axes begin before picking up with a beat, this one has a thrash/power metal crossover feel which is highly effective. "Into Purgatory" is yet another mandatory riff slugfest, and the final, title track is nearly as intense as "The Reaper". Did I mention I loved the lyrics on this record, as simple as they were?

You just don't hear an album this well-crafted every day. It retains its level of excitement even now, with a bold production. I've often felt Toxine's snarls were a little too low in the mix of some songs, in particular on the followup Dead, Hot and Ready. This is not the case here, as they are perfect. The riffs conjured up here by Jensen & Co. are molten fucking hot, the band truly had a grasp on what made their influences so strong and channel it forth into an album that is effective and fun. It is a shame they've never been able to rival what transpired on this disc. Dead, Hot and Ready is still pretty good but nowhere near as catchy in my opinion.

Thrash until death! And do it to this album.