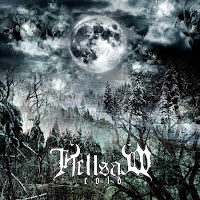 Hellsaw's previous album Phantasm was a passable work of grim and desolate Austrian black metal, but nothing extraordinary. This third work is much the same as that, save for a slightly greater emphasis on glorious melodies. Truth be told the songs here have just enough polish that I listened through a few times, and it has a great sound quality with airy guitars and Aries' tortured barking.

The album opens with a lovely acoustic segment until the meat of "A Suicide Journey" arrives in force, it has a simple but flowing pace which recalls the cold work of many other depressive black metal acts, yet a sharper tone and more melodies work themselves in through the structure. "The Black Death" comes out firing with a Bathory feel to it, this sound might as well have appeared on Blood Fire Death, and I really like the simple breakdown riff under the verse. "Der Harzwald" is a faster, shining song with some nice atmosphere to it. "Cold Aeon" has a decent thrash out black metal beginning, and "Psycho Pastor" opens with a creepy chant and narrative segment before becoming what might be the album's most interesting track. The sombering "Sulphur Prayer", mostly just resonating guitars with a few drums and tortured howls, is also nice. Other high points are the glorious "Moonrites Diabolicum" and pummeling, frost-tinged "Ache".

The band really brought out a lot in the mix, the guitars are crystalline cold like a bitter nite of rime-filled fields and pale moonlight. The drums, guitar and bass are all mixed very well and the vocals only complement their despair. Each song has an intriguing moment or two, even if some of the writing seems average. The warm tones do not betray the cold disposition of the band's lyrical themes, and it's a decent black metal album worth a fair shake.