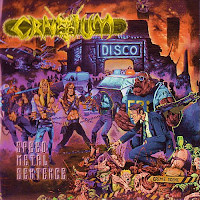 The plot of Cranium was quite clear: take and reconstruct a bunch of Germanic speed/thrash riffs, apply the wildest vocals possible and have a party with it. While the previous album Speed Metal Slaughter was a little more 'direct' in its biting off of its influences, the brighter production and mishmash attack of Speed Metal Sentence actually finds the band culminating a sort of self-awareness and identity.

This band was never meant to be taken seriously, all of its members are known from a multitude of other bands. Chainsaw Demon (aka Fredrik Söderberg) has been in Dawn and Dekapitator. Grave Raper was Philip von Segebaden of Afflicted and Defender. The late Necro-Nudist was the drummer of Utumno. Also of note is the fact that Cranium were doing the silly retro-trash thing LONG before the current crop of pretenders sucking at the trough. And unlike most of these hacks, they managed to do it with a little excitement and charisma. That's not to say Speed Metal Sentence is a great record, in fact it just squeezes by into something I'd recommend to fans of tongue in cheek thrash metal tributes. The lyrics on the album are awful, but then, that was the intent.

Chainsaw Demon's vocals range from a more annoying take on Overkill's higher pitch to a snarly Destruction style. The skit in the opening title track is pretty embarrassing, and it's far better when the band are just thrashing the fuck out, like on "Nymphomaniac Nuns", "Pestilential Penis" and the epic "Samurai Satan" with its live show environment. But perhaps the best track here is the final track "Cranium: Crushers of Christ" with some excellent riffing and even death metal vocals. Had the entire album been cut from this cloth I might rate it a little higher. There are still some dopey 'skit' segments to this song but the metal is in full effect and had this been from any more serious band it would be a great track.

There was a time at which I thought this was the best Cranium album, but in retrospect I may prefer the more derivative Speed Metal Slaughter or the Speed Metal Satan EP. Still, if you want a good time, and you like thrash/speed metal parodies, you're better off checking out this one than just about anything from the 21st century.