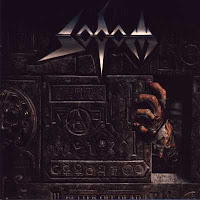 It may be best known for its unforgettable track "The Saw is the Law", but the more I've spun Better Off Dead, the more I've realized the album is the perfect crossroads between Sodom's raw and thrashing beginnings to their more rock and punk influenced, later albums (though the band has since reverted to its thrash roots).

Better Off Dead has an excellent Harris Johns production, so if you turn this up you will be pleased by the results on almost any stereo system. The songs alternate their pacing quite well; it's a good balance between a savage German thrash precision and a hard rock/NWOBHM feel, the latter of which is anchored by the covers of Thin Lizzy's "Cold Sweat" and Tank's "Turn Your Head Around".

The album goes for the throat immediately with a trio of power house anthems. "An Eye for an Eye" sounds like Accept's "Fast as a Shark" on crack. Tom Angelrippers accented and charismatic vocals are all over this album like whores to a Benjamin Franklin. "Shellfire Defense" is pure thrashing war metal in the vein of their classic tracks like "Nuclear Winter" or "Agent Orange". A very catchy chorus. Even this could not prepare one for the slower paced rock'n'roll meets thrash savvy of "The Saw is the Law"!

Slazing scents taint with blood
Signed his path of death
Trace him to the place of fright
Searching for his daily bread
When midnight comes around
Be warned because he is out of sight
What carnal secrets does he hide
His ruthless rage will come
Buried deep inside his mind
The rites of the saw began!

After this it's all continuous, methodical awesome. The cover of "Turn Your Head Around" rips forth, and Angelripper's vocals rule. Tank receives some justice. "Capture the Flag" is yet another slaying Sodomite wargame. "Cold Sweat" is more of a recognizable cover tune, but still performed quite well. "Bloodtrails" is one of the best thrashers on the album, with a furiously fast paced verse riff kicking all manner of ass. "Never Healing Wound" is a fuel injected rocker, while the title track is another filthy excursion into rapid destruction. "Resurrection" is another of the slower paced tunes, but it has some excellent riffs, and I was taken by surprise when the great vocal harmonies came in at the end. "Tarred and Feathered" spits further thrash venom, and the album closes with the punky "Stalinorgel".

This is a great album, rock solid. As I mentioned, it's mixed by Harris Johns who is pretty much the best record producer of the 80s, responsible for Walls of Jericho, Deception Ignored, Consuming Impulse, Dimension Hatross, and so many other classics. Whether you are a fan of their beer fueled punkish albums or their old school violent thrashing, this is an essential album. My reaction at first was mixed, but it's since grown on me to become one of my favorite Sodom albums, and may continue to do so.