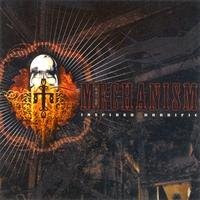 Mechanism is a new project featuring Chris Valago and the legendary Gene Hoglan, both also of Canada's Zimmers Hole. Unlike that other band, this is not a parody, but a technical death/thrash band with a lot of progressive elements. The vocals range from snarls to singing and I am often reminded of Devin Townsend in Strapping Young Lad (also connected to this band through Hoglan and Valago).

The production of the album is quite good, as you'd probably expect. Dense and punchy guitar work, and Hoglan's drums are all over the place, the man excels whether he's blasting or just taking it in stride. The guitars of Kris Schulz and Bryan Somerville are also quite good, it's fun just to listen to them shred out these insane riffs. The problem here is there aren't a lot of hooks that drew me in, and Valago's vocals often make me cringe, especially when they get all 'theatrical' in tracks like "Lobo". He's not so bad when he's growling, it's just the cleaner vox and the lyrics that did me in.

As far as highlights, I really liked the slower riffs in tracks like "Unsinger" and "Siberia", they build up a nice groove to them. I can't help but feel fans of related projects like Strapping Young Lad, Zimmers Hole and the Dethklok house band would want to check this out, it does retain a little of the silly streak but nothing overboard. The band can certainly mete out some punishment, but I didn't find any of the songs to be memorable.