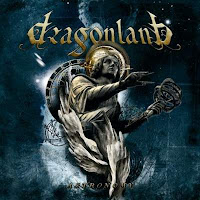 Four albums deep and this fantastic Swedish act proved yet again that they are criminally underrated amidst the prog/power metal circle. Astronomy is a glorious effort which manages to transform even its more annoying elements (I'm speaking of the guest fairy metal vocals and chug rhythms) into strengths. Jonas Heidgert sounds excellent here, his voice a clarion which should appeal to fans of other Swedish power metal acts like Nocturnal Rites or Dream Evil. On the whole, this album feels a little less ambitious than its predecessor Starfall, but the qualities remain intact.

"Supernova" is an excellent choice to lead off the album. It begins with a perhaps too-obvious sample under some ambience, then a symphonic synthesizer sequence is accompanied by some chugs and a pick-up riff which leads into the female vocal part, which I admit with some guilt, is quite beautiful. The verse has an excellent little guitar fill which breaks up its basic chugging structure, and this really makes the track. "Cassiopeia" once again uses the female guest vocals to good use, here she sounds a little like Anneke (ex-The Gathering). The verse to the track reminds me a little of Evergrey, and the chorus features Heidgert and Elise doing a dual melody. "Contact" picks up the pace considerably with some great riffing, and I enjoy how the verse begins with just Jonas, the drums and some ambience. The chorus features some anthemic European metal closer to their first few albums, and a great little shred. The title track is another hard rocker with some great melodic voice work. "Antimatter" actually sound slike a melodeath track at first, and Jimmie Strimmell of Nightrage contributes a few backing snarls. "The Book of Shadows Part IV: The Scrolls of Geometria Divina" is a nice break and totally different from what you've heard so far. It's a symphonic instrumental with some nice vocal samples and a tribal buildup. Really cool, and would probably do well in a video game. Other notable tracks are the anthemic "Beethoven's Nightmare", "Direction: Perfection" with its catchy verse synthesizer, and the three part symphonic/prog metal epic instrumental closing the album, called "The Old House on the Hill". My only complaint with this is it may have benefited from more use of the vocals to tie the album together, but as it stands it is still quite enjoyable.

The mix is excellent as with so many of these power metal albums. The synths and guest vocals are used to great effect and the band is endowed with talent in all departments. That being said, I wound up liking this a little less than Starfall. Either way, fans of power metal with prog leanings owe it to themselves to track this band down.