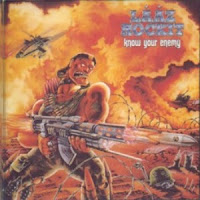 These guys were a pretty big hit among the US thrash metal hordes of the 80s: they hovered just below the level of popularity that bands like Overkill and Testament managed to accrue, and I had many friends who cited them among their favorite bands of the day. They were never one of my own personal thrash crushes, but Know Your Enemy was a good album that I listened to quite a lot and will occasionally spin again. It's got just the right amount of grittier aggression but still centers on catchy hooks.

"Demolition" opens the album with a creepy haunted castle vibe, followed by the excellent "Last Breath" with its brutal battery of searing speed metal guitars and a great breakdown chorus. "Euroshima" is wild political thrash frenzy. "Most Dangerous Game" is some quality speed metal based on a great story, and I like the acoustic intro. Michael Coons has a great way of mixing his shrill higher pitch with some powerful dirty edge to it. "Shot to Hell" coils about a very common chord structure but still comes across exciting. Other good tracks include "Say Goodbye M.F." and "I'm Electric".

Like many other 80s bands, Lääz Rockit does sort of fall between genre distinctions. I'd say they are just as much early power metal as they are a thrash band. This album marked a slight shift from their earlier street metal sound (No Stranger to Danger), and after this they'd get even more thrashy on Annihilation Principle. In any case, Know Your Enemy has a nice raw energy to it which I enjoyed more than their other albums. It may not be first rate songwriting but it's good enough and I'm sure many thrashers wax nostalgic about this.

Not surprisingly, the band has reformed and released their comeback album last year.