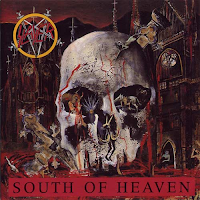 Slayer had a tough decision to make after releasing Reign in Blood in 1986 - do you make Reign in Blood Part Deux or do you do something different? In 1988 this was answered when South of Heaven was released, an album that was slower and much more melodic than it's predecessor. Was this the right decision? It's hard to say, some people didn't like the more melodic Slayer, though I will admit that I have preferred the later Slayer over their earlier stuff.

The album starts with the title track and as soon as the first riff begins it's evident that this is a different album than Reign in Blood. "South of Heaven" starts with a slow, almost doomy riff, and like with every Slayer album, the title track is always the best song on the album, which is a bit disappointing since this is the very first song! But thankfully "Silent Scream" follows up and it kicks the album up a notch with it's great melodic thrash style. "Live Undead" is another great song with a extremely groovy main riff. Sadly while the next few songs are all really good, the later part of the album - starting with "Read Between the Lines" and ending with the Judas Priest cover of "Dissident Aggressor" - is quite weak and disappointing. It's good then that "Spill the Blood" gives the album a reprieve with another great doomy song like "South of Heaven".

Araya's vocals are, thanks to the slower feel of the album, a lot cleaner and crispier than on the previous albums, and I really like it. The instruments haven't changed much - Lombardo still blasts out some fast beats, Hannerman and King bring some new interesting and enjoyable riffs and of course their signature solos, and finally Araya's bass is there, and that's about it. Overall I feel like this album was a great direction for the band to take, and dare I say it, a bit more enjoyable than Reign in Blood.