Diabolical Masquerade - Ravendusk in My Heart (1995) 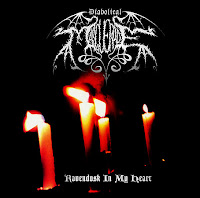 Anders Nyström is known to most as the brilliant guitarist and composer of Katatonia's melodic doom, or perhaps for his work with all-stars Bloodbath; but for a period, he was also the enigmatic Blakkheim of Diabolical Masquerade, his solo vehicle. And quite the vehicle, for it rode through four albums of quality that are much beloved across the underground. Ravendusk in My Heart is the first of these, a collaboration with Dan Swanö and a great window into the gothic and symphonic black metal of the mid 90s.

The theme of the album is the central character Blackheim's voyage into many black metal/gothic 'tropes', and the song titles reflect this. We have "Blackheim's Quest to Bring Back the Stolen Autumn", "Blackheim's Forest Kept the Season Forever", "The Sphere in Blackheim's Shrine", and who could forget "Blackheim's Hunt for Nocturnal Grace". The thing is, I'm not sure just how tongue in cheek this was meant to be. It's funny, but at the same time it's actually quite graceful, you can really close your eyes and venture forth the imagery of this titular character, some vampiric black metal baron living in these lonely gothic landscapes as he tries to divine meaning from the natural world around him. It ends up quite an endearing album, with some good tunes to boot, and absurd Swenglish lyrics like:

The best songs are the more epic pieces like opener "The Castle of Blackheim" or the sweeping "The Darkblue Seajourneys of the Sentinel", but the album stops to have fun on the shorter "Under the Banner of the Sentinel" with its cheesy King Diamond-like shrill vocal work and raging heavy metal themes. The instrumental "Beyond the Spiritual Moon" is a lovely little interlude, as is the closing and haunting title track with its pumping bass line beneath synthesized ambience and the gothic spoken word of Blackheim. The Dan Swanö production was fantastic for its time (like so many of his efforts) and still sounds good today, though it's been remastered as well.

TThis is the type of album which I initially had a mixed reaction too but has never quite left me during all these years. In fact my appreciation has only grown. It does have a little of that quirkiness to it (most Diabolical Masquerade albums do), but not to the level of a Gloomy Grim or Rakün. I once had a preference for The Phantom Lodge and Nightwork over this album, but I've gone a fraction dry on those, so this still provides his best, eerie trip down memory lane.

Verdict: Win [8/10] (the mercy is for the wisdom and the slayer is our reward)

But have I done justice to the album that has so inspired the very life of our own Dreadkommander Nekrokreuz...

I didn't know that Rakun have an umlaut in their name. Those silly raccoons.

The umlaut actually originated when a woman long ago woke to the sight of the two black dots that were her husband's clawed-out eyesockets.

and auto... I must nod in concurrence as I survey my Carpathian darkforests and absorb these antediluvian blasphetunes.