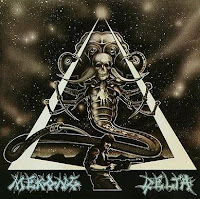 Mekong Delta have long been lauded as one of the first of the 'technical' thrash bands, using progressive rhythms and all manner of experimentation in their sound, though these are encased in a pure thrash/speed metal core. They are also known for a revolving door of various members from peer bands through the years, including Peavy Wagner (Rage), Uli Kusch (Masterplan, ex-Helloween, etc) and Jorg Michael (many bands), the last of whom actually plays on this record. Mekong Delta is probably the most straightforward of their albums, speed metal frosted with progressive thrash leanings;
though it sets up hints at their future.

It's as fast as furious as their albums would ever be. "Without Honour" begins with cerebral guitar wanking which explodes into a speed metal rush. Keil (Wolfgang Borgmann, the band members used alter egos at this point) has a pretty Germanic style to his vocals, in fact they sound suspiciously similar to Peavy's vocals in earlier Rage... "The Cure" begins with some synths and a choppy, tense riff pattern with some flowing taps and mad leads. "The Hut of Baba Yaga" is an instrumental with a jam-like feel. "Heroes Grief" begins with some ambient guitar sludge before it becomes a slower thrash tune with very bizarre vocals, occasionally sounding like old Soundgarden... "Kill the Enemy" is back to your flippy circus thrash that the band executes so well. "Nightmare Patrol" sounds a lot like an early Rage tune, the vocals have a lot of echo to them and the riffs are sporadic and fast. "Shivas Return" is a similar style. "Black Sabbath" is a doomier thrash tribute to the band of the same name, and it's actually the weakest track here, goofy in both concept and execution (they use a lot of Sabbath song titles in the lyrics...ugh). "Back Home" is a decent closer to the album.

The album still sounds pretty fresh today, though on the grittier side. All the instruments are clear, it's not as dirty as other early German thrash albums. I used to be quite fond of this album, but over time the later stuff like The Music of Erich Zahn and The Principle of Doubt have grown on me, while the appeal of the debut has diminished. It's still a solid album and ahead of its time, German speed/thrash fanatics will chew up its interesting riffing and raw, fast sound.