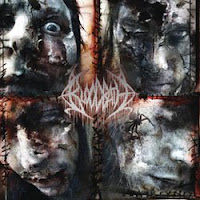 There are recipes for success and then there are recipes for success. Combine the talents of Jonas Renkse (Katatonia, October Tide), Blakkheim (Katatonia, Diabolical Masquerade), Mikael Akerfeldt (Opeth), and Dan Swanö (Edge of Sanity and a few hundred other bands) into a loving tribute to their death metal roots, then profit. The Breeding Death EP from 2000 was a nice teaser, but fortunately the band saw fit to record all new material for this full-length debut, which for a while, remained my favorite of this project's albums, though pretty recently I've come to the conclusion that its successors have indeed surpassed it.

Bloodbath were not out to win any awards for innovation, but to strip away the complexity of their current projects and have a good time writing what comes natural, old school Swedish death with the crunch on overdrive. That the songs are this polished is a testament to the compositional and production skills of its membership, but I wouldn't necessarily consider this a classic for the genre (and I think other retro Swedish death bands, like several of Rogga's projects, are superior).

The album begins with a nice fade in to "Ways to the Grave", a crushy blow to the skull with a nice creepy riff after the midpoint. "So You Die" begins with a tearing lead over a thick rhythm, then splitting off into some groovier segments. "Mass Strangulation" has a great, wailing atmosphere during its breakdown which is one of the more kickass moments on the album. "Death Delirium" is a fine track, highly reminiscent of old Entombed. I'll be honest, almost the entire album sounds like a sequel to Clandestine. But that's not a bad thing. Other standout tracks here include "The Soulcollector", the riffy "Bathe in Blood" and the brutal "Like Fire". It's good to hear Nystrom performing in a different style than his usual gothic/doom leanings, and Akerfeldt sounds absolutely intense in his vocals here, easily the rival of any of his Opeth growls.

Resurrection Through Carnage succeeds at its goal, and it's always great to hear a group of veterans put something like this together. The effort is sincere and should not only appease fans of the early Swedish bands, but perhaps even drag some fans of the members' newer works into the style. The day some Opeth scenester kids come up to me at the mall and tell me they've been listening to Dismember or Paganizer will be the day I can die happy.