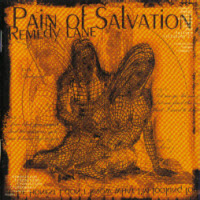 Daniel Gildenlow is a giant blow hard. You don't really have to look further than BE where he had fans call his phone, pretending it was God's answering machine, so they could leave him a message. Unfortunately for the musical world he did manage to produce at least two albums that could be considered masterpieces and a couple of other good, not great, works. Remedy Lane is the one of those two albums. Its an example of everything I like about progressive music, compelling and new rhythms driven by expert musicianship and emotion, rather than a showy solos and stuff.

The album starts with the typical prog intro track then moves into "Ending Theme," which has a nice heavy riff and catchy chorus, but suffers from some rhythmic spoken word part in the middle that comes off as a bit silly. "Fandango" follows and where the real meat of the album picks up. I don't have the musical vocabulary to describe the various prog stuff that goes on here and in other songs, but suffice to say there are quite a few varying rhythms in the music here that are percussive and hitting yet restrained. Like the previous song, this one has a somewhat silly vocal section that comes off a bit like rapping. The idea apparently is supposed to represent to halves of a person, or two people in a relationship, but really it could have been done better, but that's Gildenlow for you.

He is, no doubt, a talented singer with a unique voice. As a lyricist he can be hit and miss. Sometimes he tries to hard, sometimes he produces the next track on the album "A Trace of Blood." In this song he laments the miscarriage of his child to a driving piano melody and flighty lead guitar that devolves into a more appropriate heavy riff.

The highlight of the album for most listeners is probably "Chain Sling." It opens with a slight guitar riff that builds a bit before Gildenlow comes in with his voice at possibly its highest pitch. Here he plays with the idea of dueling voices again, but it comes off much better than the rap in Fandango. This is the song where the whole idea behind his band comes to fruition and is exemplified in a chorus that sums up the emotional core of the album.

There are a handful of slower softer tracks on the album that are quality, but maybe not as complex as the heavier tracks. "Rope Ends" and "Waking Every God" are probably the other two stand out tracks to those mentioned. Have faith though! It is not all praise for Gildenlow, because for some reason two-thirds of the way through the album he decides to assault your ears with a terrible synth piece that revolves around some of the musical themes from prior songs. Who the fuck knows why its in there, maybe he couldn't get anyone to call his answering machine at the time.