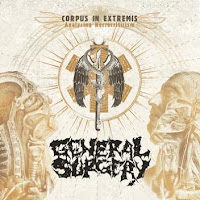 How is that for an album title? Though they've existed in the underground for over 20 years now (though with a decade of inactivity), this is only the 2nd full-length release from the Swedish all-star deathgrind sensation. As an example of how integrated this band is with the Swedish death scene, its current line-up boasts present and former members of Maze of Torment, Repugnant, Birdflesh, Face Down, Afflicted, and The Marble Icon, among others. Corpus in Extremis is a good, swift boot to the neck in the band's traditional Swedish death/grind hybrid. A worthy follow-up to their previous album Left Hand Pathology and an album sure to thrill old school death heads and D-beat shit kickers alike.

My own personal necrocriticism of this album is that it kicks serious amounts of ass, across 15 tracks there is hardly a single miss. I admit some partiality to the faster tracks like "Ichor" with its intense guitar battery (amazing riffs), or "Unwitting Donor/Cadaver Exchange", but the album also scorches when its moving at the slower grinding d-beat of "Retrained Remains" or the grooving thrash of "Virulent Corpus Dispersement". The entire affair is laden in the expected, dense guitar tones which have made Swedish death metal so immortal in its legions of die hard fans. And unlike many of the band's deathgrind peers, they deliver every tempo with the same level of excitement. You won't be bored here, ever.

Quality surgical craftsmanship from a well-versed lineup of scene veterans, and one of the finer true Swedish death metal affairs I've heard lately. Pick up this one along with Revolting's Dreadful Pleasures and enjoy the hell out yourself.