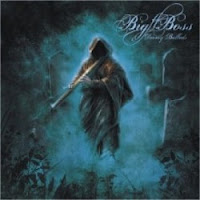 Root has long been one of my favorite bands; their approach to occult black metal is both distinct and unforgettable and this is due largely to the presence of their frontman Big Boss. Though his work in Equirhodont and his solo albums are not quite at the level of Root, they are nevertheless pretty fascinating listens. Doomy Ballads, his third solo work, is no exception, a moody and poetic piece in a diverse range of styles. Sadly, some of the material is mediocre, with the exception of two mighty tracks which moor this album down and make it worth the while.

"The Wind" is a brief, ambient intro with some spoken word accompaniment. "The Cognition" is a building ballad with some bluesy solos, it works well enough to set a tone for the album but it's not exactly memorable. "Solitude" is possessing more mystique, which some doomy guitars, whispers and ambience to accompany its spatial acoustic sorrow. Boss's dark gothic baritone rolls over this morass as if it were a Transylvanian thunder. "Tears of the Ages" is a piano piece with some faint lead guitars and morose Big Boss musings. It's not a bad touch but again, not very catchy. This is all rectified once the first few glimmering chords of "The Ocean" kick in, because not only is this song the best solo Big Boss track I've ever heard, it's the BEST song I have heard yet in 2009. It's sort of like a pop/goth hybrid, with some nice ambiance under the clean guitars, and Boss doing some of the most beautiful vocals I've heard in my life. That this guy is capable of putting out albums like Hell Symphony and The Book and then show this sensitive side, is ample evidence of his quality as a composer and musicians. It's a beautiful track, as he speaks to the subject of the album's title in such simplistic and poetic terms. "You create and you destroy". I was fucking stunned by this song, it's one of those moments where you have to keep replaying it over and over for an hour until you grow sick of it. "The Moment of a Pearl" is a bluesy tune that reminds me of "Knocking on Heaven's Door" or something. Pretty dull. Then the album gets a little more metallic, with the doomy "The End" and the excellent "I Scream in the Dark of Loneliness" with a faster, progressive metal feel. He closes the album with a classical piece "Adagio Cantabile", which isn't bad.

So in the end, this album is worth hearing if only for "I Scream in the Dark of Loneliness" and the hypnotic song "The Ocean". If only he could turn this into a hit single, we might be spared some of the usual radio/MTV garbage. Because it's really that accessible and catchy provided you enjoy the deep gothic style of vocals. As for the rest of it, well, it's just not at the same level, but you need to hear "The Ocean" anyway, so it wins.