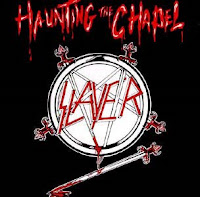 What better way to celebrate one of the most blood curdling debut albums in the history of metal than to follow it up with a fresh and devastating EP. Many Slayer fans may have had their first exposure to these tracks on the re-mastered edition of Live Undead, where they have conveniently been placed.

The material here is a natural extension of Show No Mercy, and some of the most focused songwriting of their career. "Chemical Warfare" remains one of the most cruel and vicious speed metal songs ever recorded, with its violent build up and then one of the most catchy and simplistic riffs ever devised. Araya's vocals are pure evil as they spit forth the lyrical equivalent of biological armageddon:

Gods Of The Throne Must Be Watching From Hell
Awaiting The Mass Genocide
Soldiers Defeated By Death From A Smell
Bodies Lie Dormant No Life
Rising New Souls On The Land Where They Fell
Demons Not Ready To Die
Nothing To See Where The Sleeping Souls Lie
Chemical Warfare
"Captor of Sin" begins with a rock out riff to a disgusting and messy lead (the Slayer trademark), then busts out a cruel thrash riff under the Satanic lyrics. "Haunting the Chapel" closes the original EP with a nice riff that almost foreshadows the style that would be come more prominent on Reign of Blood and South of Heaven. It reminds me a little of "Die By The Sword", as if I feel that chorus will break out at any moment. The lyrics to all the songs are good.

If you have the 1993 re-issue of this EP material, an extra song is included: "Aggressive Perfector", which originally appeared on the Metal Massacre 3 compilation. It's a groovy and evil track with a nice bass line to it, but not as strong as the original material on the EP. Again, it has some nice and sloppy solos in that tradition Hanneman/King style.

Haunting the Chapel sounds very close to Show No Mercy as far as its overall tone, the material could very well have appeared on the full length album. Still, it's a damn good example of their early work, when the band was groundbreaking and sinister and well worth a damn.